View Profile
Mumbai, April 9 (IANS) She is known for her comic timing, but Juhi Chawla says her 'Krazzy 4' s 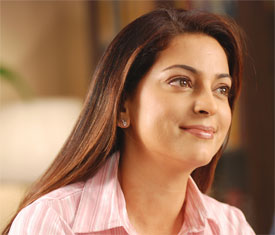 Featured Video
tars beat her to it with their superb sense of humour, so much so that she had to beg them to stop making her laugh.

She teams up with Arshad Warsi, Irrfan Khan, Rajpal Yadav and Suresh Menon in the movie directed by Jaideep Sen and produced by Rakesh Roshan.

'It was a complete blast! They made me laugh so much that my mascara used to come running down sometimes! I had to beg them not to make me laugh and let me do my scenes. All four are quite special in their own way and we were quite a good team,' said Juhi in an e-mail interview.

After 'Deewana Mastana', Juhi wears the hat of a psychiatrist once again for the film and the four actors play her patients.

'I am the only responsible person in this crazy film. I play a psychiatrist and these four are my patients. I decide to take all four to a trip into the city and I somehow fall into a trap and, to everyone's surprise, it is these so called mad people who actually have the sense to help me out.'

'It is a very sweet satire which also teaches us a lesson while having fun. I have a small but pivotal role...in a sense, the film revolves around me.'

The former Miss India entered Bollywood with 'Sultanat', but her first big hit was 'Qayamat Se Qayamat Tak', in which she was paired opposite Aamir Khan. She later went on to give hits like 'Darr', 'Hum Hain Rahi Pyar Ke', 'Yes Boss' and 'Ishq'.

Over the last few years, the actress has become selective and prefers to work in offbeat films like 'Jhankaar Beats', 'My Brother Nikhil' and 'Ek Pal'.

Asked why she picked this role in 'Krazzy 4', Juhi said: 'I have always wanted to work with Rakeshji and also I know the director Jaideep Sen since he was assisting. He is very capable and I knew I would be in good hands. Also, I relished the opportunity of working with my four co-stars.

'FilmKraft is a very efficient, quality production house and you can 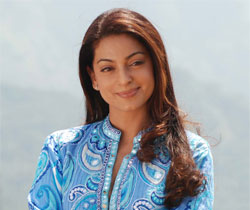 always guarantee your film will be of the best quality in Rakeshji's hands.'

Do you miss working in comedy films?

'I had my share of lead roles and fun and I did everything I ever wanted to do. I don't miss much and I am always looking out for quality roles, whether big or small, not necessarily comedy or romantic.

And when she is not shooting for films, she keeps busy learning music.

'I have started to learn music, so my free time goes in doing riyaaz. Apart from that, my children, family and social events take up all my free time, so I'm happily busy even when not working.'

Juhi will also be seen in the Amitabh Bachchan starrer 'Bhootnath' and Aziz Mirza's 'Kismet Konnection'.