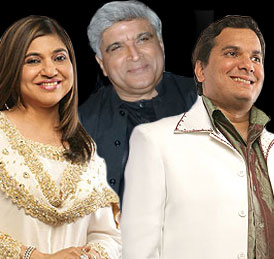 The famous trio has performed before cameras for 'Mere Khwaabon Mein Jo Aayen', a forthcoming Bollwyood movie being shot at a bungalow in Versova, a Mumbai suburb, Friday evening.

The trio, however, did not have to struggle hard to 'act' before the movie camera. Even in the film, they play judges of a musical competition.

Producer of the film, Madhurita Anand, obviously signed up these non-professionals in order to cash in on the images they have lately earned for themselves on TV shows.

The so-called reality shows, particularly those based on music and dance contests, are more make-believe than real, especially for the judges.

They have learnt to put up such an act that they seem to have proved themselves as past masters at histrionics.

For example, music director Anu Malik, as a judge, harangues the contestants in the musical reality shows and Javed angrily walks out, following alleged differences of opinion with fellow judges.

Similarly, Alka Yagnik gets into a 'serious' verbal duel with singer Abhijeet (as they did during the 'Indian Idol' musical reality show on Sony TV recently).

When they do so, they remain true and faithful to the scripts written specially for these programmes.

On these reality shows, they usually mouth out the lines written for them by scriptwriters with fertile imaginations and with a sharp eye on TRP ratings.

Considering that the viewers believe the acts the judges, by and large, put on for these shows to be 'real', they convincingly prove themselves to be as good actors as the professionals, Bollywood watchers say.