After a long gap of six years, Abhishek Bachchan has gotten behind the mic once again for Rohan Sippy! 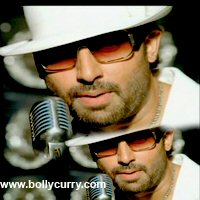 Jr. Bachchan has performed a special rap song titled 'Thayn Thayn' for the high voltage soundtrack of Sippy's much awaited thriller Dum Maro Dum which will hit the box office on 22nd April 2011.

His previous rap number 'Right Here Right Now' was a super hit with the masses. The song had the actor alongside Sunidhi Chauhan with dynamic duo Vishal-Shekhar composing. This time the track has been created by maverick composer, Pritam with Earl and Ayush Phukan lending their support.

Abhishek, who sees his lyrical skills as somewhat nonexistent, tweeted: "Back in the studio after 6 yrs with chuck masta Sippy. Have no idea why he's convinced that I can sing!! But Pritam's killing it!!!!" (Twitter (c))

Well Abhi, judging by the amazing response of your first song we say you can definitely hold your own behind the mic! Readers do give the track a listen and tell us what you think...