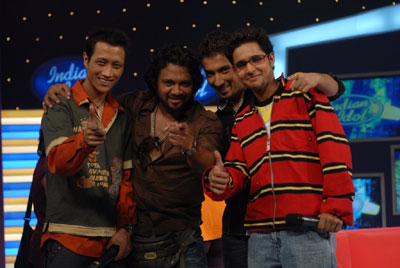 The Third season of Indian Idol is in its final phase now and the competition gets tougher, as it is ‘Survival of the Fittest’ between the 3 top contestants. The 3 contestants left in the fray, basking in all the attention and enjoying every moment of it, Amit Paul, Emon Chatterjee and Prashant Tamang are having a great time. 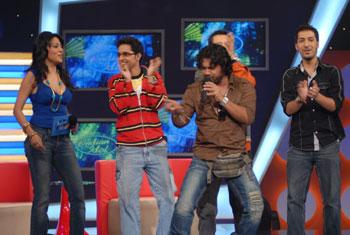 The male bonding is clearly visible and Mini Mathur is trying her best to make one contestant reveal the secret of the other. When it comes to mastering the knack of making a person spill the beans, who else is better than the host of Roobaroo, Mini Mathur?

‘Let the cat out of the bag’ surely seems to be the Theme of this week’s Roobaroo. Prashant talks about his best buddy Amit Paul, and lets out some secrets about him. After this, will Amit be far behind? He joins in to talk about Prashant and what followed is a complete laugh riot. Next in line was Emon, who has a talk about both of them and thus the cycle is completed and Mini’s wish list fulfilled! 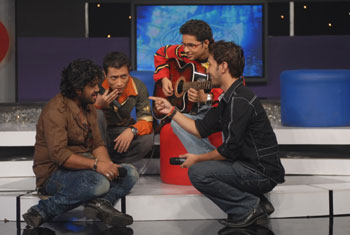 The surprise guest of the evening was Jojo, who made the show more memorable for the contestants, by singing his new song Maheru from his latest album. Jojo had a confession to make! He said that he has been following Indian Idol and that he loves Amit’s voice. "It's great for playback singing", he revealed. He said that he is rooting for Amit as the next Indian Idol and he feels that the whole nation also wants him!

Amit with his new look, style and shy charm is fast turning out to be a ladies' man much against his wishes! At their recent concert in Indore, a young enthusiastic fan insisted on dancing with Amit on stage, and Amit simply refused to oblige… because he is so shy. His friends have yet to stop ragging him about it..

Watch all the fun on Roobaroo on Thursday, September 6 at 9 pm only on Sony Entertainment Television.

randika 13 years ago thanks you i love shahid and amrita jodi most but kareena best suites with hrithik roshan.

14 years ago vaah.. kya news hai.. that was great amrita with shahid.. i like that new couple..

+ 3
14 years ago I never thought Kareena would leave him. I always wanted Amrita and Shahid to be together. Welcome the new couple!!!

14 years ago cool!is jojo the dude who sang maaheru or something?lol.....I like that song!i'm gonna be really upset if any of amit or emon leave this week.prahshant HAS to go!he's the weakest.........finals between emon and amit will be amazing and something to look forward to!

14 years ago oh my god! i though that famous english singer jjojo!haha!

14 years ago I totally agree with you *Jaya*.. i've the same feelings.

14 years ago I just hope that Prashant goes off.... but that looooks extremely far fetched at this moment!!

I would also want Amit to win... will not complain if Emon wins as well :)

But I have a fear that Prashant Tamang is Sandeep Acharya in the making!!