India witnessed a new generation of programming with Star Plus' Sach Ka Saamna. This show stirred the soul of millions to face their hidden truth and gave truth an all new meaning. The gripping concept not only attracted viewers but also created a new wave in television viewing. 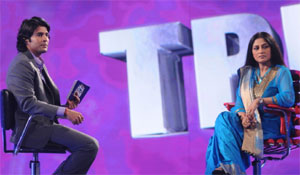 Reaching its grand finale on September 18th at 11:00pm on STAR Plus, viewers will be privy to the emotional journey of India's renowned and acclaimed actor Roopa Ganguly, popularly recognized for her role as Draupadi in B R Chopra's tele-epic Mahabharata.

This addition to the Sach Ka Saamna family, will witness hard hitting questions by the calm and composed host, Rajeev Khandelwal, who with every contestant has been able to establish a unique relationship. The very last contestant on the hot seat will also share her emotional journey and all the tribulations that she has gone through with a dignity and honor.

Commenting on the stupendous success of the show Anupam Vasudev, EVP, Marketing said "The show's content was based on the good old Indian principle of Satya Mev jayate (Truth always Triumphs) and rewarded people for having the courage to speak the truth. This has been very well appreciated by our audiences and has definitely left an indelible mark in their minds. We are very happy that the show concept has been accepted and we will continue to bring a refreshed line-up of shows to keep our viewers entertained."

Further adding on, Rajeev Khandelwal said, "The popularity of the show never slipped which is very rare on Indian television. It's been my honor to be associated with a path breaking show like Sach Ka Saamna and also with a channel like Star Plus that presented the show to the audiences in the most effective manner. I am leaving the show on a high and hope for season 2 soon!"

From nail biting anxiety to answers that will almost have you fall off your chairs, the show has kept the bout of anxiety high with each contestant. At the end, the game rewards honesty by testing the nerve, resilience and integrity of a contestant. The show is an attempt to bring about a positive change by helping the contestants shed their baggage.

Be a part of the courageous journey of actor Roopa Ganguly on the finale episode of Sach Ka Saamna on September 18th at 11:00pm only on STAR Plus

Miss.khandelwal 11 years ago i miss you soooooooooooooooooooo rajeev
he is excellent host brilliant actor.
he is sooo oooooooooooo handsome.
i miss you raj very much. but i still very happy his next project special SLB CG. all the best rajeev.
i hope great future in bollywood. love raj.
my dream rajeev look on deepika together any film.

^orpita^ 11 years ago gosh mr. evp you r saying as if it was your concept?? ppl will laugh on u.. dont be such stupid .. no offence though..
but ya i will surely miss rajeev :(

will watch this one.

MasoomaBukhari 11 years ago Its really sad that SKS is ending...... I will reallyyyyyyyyyyy miss my Rajeev.

*Adorable_Anu* 11 years ago Am gonna miss this show. was awesum. awaiting season 2!

Knowalot2 11 years ago I hope Rajeev does do Season 2 as well :D