View Profile
During the shoot for his upcoming Film "New York", John Abraham was quite the dare-devil as he decided to do his own stunts even though the director and stunt-director had br 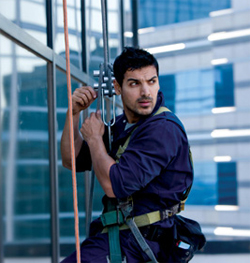 Featured Video
iefed him with the risks involved in the shot. But John was unaware of how this risky stunt would turn into an incident he would narrate to his friends later.
Apparently the director Kabir Khan, was not happy that the movie had a few stunts, so he decided to add a few more, one of them included John hanging out from a 20th Floor window.
John was not happy with Kabir's demand but finally gave in. Kabir chose to shoot this stunt in a public building in Philadelphia.
The timing could not have been worse as the United States president Barack Obama was due to cross the area along with his entire entourage and for security reasons the area was shut down. The entire unit had to wait inside while John was left hanging from the cables on the 20th floor for 2 hours. He just had two suction pumps for his safety.
At the end of the two hours, John was rescued as the crew was let outside.
Got the wrong time, did you guys??
Authors: Nadia I, Priyaa Singh