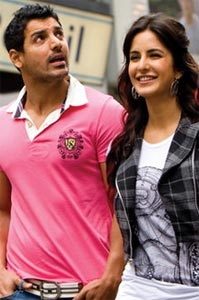 BC's got good news for fans of the New York jodi, John and Katrina. Apparently, the duo is back again to set the silver screen ablaze with their sizzling chemistry!


The latest buzz reveals that John and Katrina have been approached by Vipul Amrutlal Shah for a remake of the tamil hit Kaakha Kaakha, with Nishikant Kamat (of Mumbai Meri Jaan fame) at the helm of directorial affairs. The film is an action thriller about a policeman cleaning the crime dust from the city.


John has already accepted the proposal while Kat, who is yet to decide, has certainly not been in the negative. It's just her final confirmation that's awaited for the shooting of the film to commence since Dostana 2, another movie starring the duo along with Abhishek Bachchan, has been postponed till 2011 due to Tarun Mansukhani's dissatisfaction with it's current script.


While John has had a string of unfortunately held up projects these recent months, Katrina is still basking in the glory of the success of Rajneeti. A common project nonetheless, can do them both good, if one is to go by the appreciation received for New York.