Nach Baliye 3 this week was fun, fun & more fun! The tagline - 'yeh nach nahin aasaan' was taken to an altogether different level with the theme - Role Reversal! So what was in store for viewers? 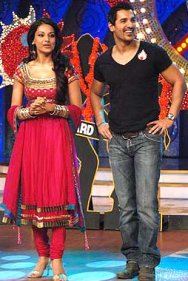 Featured Video
The 'Goal' this week was, performances with the men dressed as woman and vice-versa! Sounds funny? Funny it was..but one can imagine and appreciate the amount of effort that went into the performance. Hats off to all the men, for attempting it in the first place!

With special guests, John Abraham & Bipasha Basu (promoting their film 'Goal'), the atmosphere on the sets was fully charged up..steamy hot! So much, that Channel V had to tag John & Bipasha as the 'Hottest' people on the sets! (what a way to promote their new show - India's Hottest!)

All the performances this week had the fun element..bordering on craziness, with the men performing like women..the clothes, expressions..the works! Alexx was unrecognisable, while Aamir was showered with compliments and told that he had 'a woman inside of him'! Karan projected the docile girl well..while Abhishek was the perfect 'Basanti' to Rakhi's 'Gabbar Singh' act! Definitely amongst the best executed concept in the show! All along, John & Bipasha seemed to have a great time..so did the contestants, and the viewers too!

John & Bipasha finally, amidst a lot of fanfare, announced the winners of the 'Wild Card' entry. No surprises here.. winners were Kashmera & Krushna! At such times, one wonders how the voting system works..or for that matter, what the viewers are thinking! One episode, the contestants are voted out due to lack of votes.. and the next episode they are brought back with the highest vote count?! 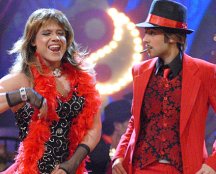 If Friday's 'role reversal' episode was funny, the Results episode on Saturday was not too far behind! Keeping with the theme, finalists of Nach Baliye 2 - Gouri & Yash Tonk swapped roles for their performance! The fun did not end there.. Yash Tonk and the rest of the contestants, with the judges too, did not let go of the chance to pull a fast one on the host, Husein..and later made him dance to 'Beedi'! What followed were a few performances..impromptu..but with the jodi's swapping their partners! While Sanjeeda chose to dance with Abhishek..Rakhi danced with Aamir! Sweta-Karan teamed up with an impromptu jig with the judges' scorecards.. and finally it was Amita-Krushna and Alexx-Kashmera! 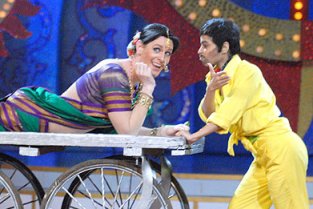 After all the fun & frolic, it was time to announce the results! And the eliminated jodi was - Alexx & Sweta! Maybe not too surprising (the jodi didn't seem surprised and took their elimination with a lot of grace!) but quite unfortunate that Sweta-Alex got eliminated at a point when they were doing well for themselves, with the highest scores for the episode which also got their choreographer, Padmini, the award for 'Choreographer of the Week'! Sad exit..but, its a competition and there can be only one winner!

Next week, another winning episode..with the Queen of Bollywood - Madhuri Dixit on the sets of Nach Baliye 3! What better platform than the Nach sets to promote her film, 'Aaja Nachle'!

Tune into Telly Buzz next week for all the exciting tid-bits and updates on Nach Baliye 3!

And can't wait to see Madhuri Dixit next week....

14 years ago the episode was funny especially to see all the male dressed as ladies. yash looked cute lol