View Profile
Fans of the hunky John Abraham and the sexy Bipasha Basu have reason to celebrate this Eid. Ever since their extremely publicized breakup in February, buzz around 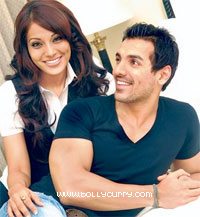 B-Town claimed John and Bipasha had been avoiding each other. However, rumours were put to rest when the duo signed on Abbas-Mustan's Race 2 earlier this year. Apparently, the sizzling couple will be seen in the same frame for two scenes in the venture.
Director Mustan confirmed the rumors stating that both John and Bips have committed to do the scenes without any constraints. The actress herself said she would do anything the filmmakers would ask her to do since she shares a good relationship with them.

We, for one, definitely applaud this high level of professionalism from some of Bollywood's finest and wish them the best of luck for this upcoming venture!

Amanda Seyfried Announces The Birth of Second Baby
5 minutes ago

NCB Dismisses Rhea's Claim of 'No Jurisdiction in Drugs ...
6 minutes ago