View Profile
Together with their impeccable chemistry, fans of the enviable duo, John Abraham and Bipasha Basu, tumbled miserably when the couple announced their breakup after a 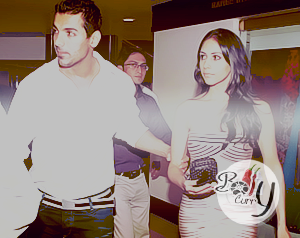 decade long relationship. However, it seems that one half of the couple is ready to move on and funnily enough, it's not who we expected.


The rather media-shy John was recently spotted leaving an event with new girlfriend in hand, Priya Marwah. While the duo refused to pose for the shutterbugs, John seemed comfortable enough for the paparazzi to click away as he entered the event.
Priya, an investment banker, is said to have been friends with John for quite a while now and has been previously spotted with the heartthrob in London, during the shooting of Housefull 2.
But what has taken us aback even further was the faint hint of wedding bells to ring! Known as commitment-phobic, rumours have it that the hunky actor is seriously considering settling down with his new lady love. Speculations of a future date round in as soon as early 2012!
When asked about it, John refused to comment stating that the matter was personal to him, however, never defying that there was someone special in his life.
One just wonders, if marriage is to be on the cards so soon, why didn't John commit to Bips? Especially, since the speculation about their break up has always been about his reluctance to tie the knot! Such are the mysteries of Bollywood!

Sushant’s sister Shweta Singh Kriti shares a video of a fan ...
25 minutes ago