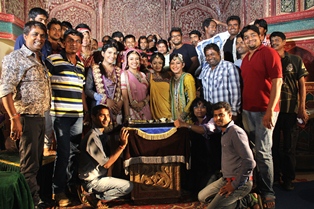 ZEE TV's popular show Jodha Akbar completed 350 episodes recently  and the Mughal empire was seen in a celebration mood. The cast and crew of the show called in for a big festivity on the sets. Celebrating with a cake cutting ceremony followed by a lot of cake smashing, the actors along with the crew of the show were seen having a blast.

Ruling the hearts of its audiences, the show is one of the most loved costume dramas currently on Indian Television. With fans in India and abroad, the show has paved its way to the hearts of million all over the globe.

Starting its journey with the proud Mughal emperor â€“ Akbar (played by Rajat Tokas), marrying a Rajput princess â€“ Jodha Bai (played by Paridhi Sharma), the show traced the journey of the two strikingly different personalities falling in love eventually. Focusing on how their political marriage brings love between them to an extent that it changed the fate of India, the show recently took a six month leap showing the couple go the family way, where Jodha delivered twins. With various characters becoming household names, the show recently saw one of its most famous characterâ€™s â€“ Mahamanga (played by Ashwini Kalsekar) exit. With its gripping storyline, the show has managed to hold the intrigue of its audience ever since its start.

Sharing her excitement on the completion of the 350 episode of the show Paridhi said, â€œIâ€™m proud to be a part of a family that has not only made me a household name but in fact has taught me a lot as an actor. I got the opportunity to work with some new and talented actors as well as industry veterans like Ashwini Kalsekar. When the show start started, never did we imagine that we will get so much love and adulation from the audiences. This gives us the motivation and strength to keep going and giving our best.   Hope the audience continues to shower their love on us and we soon celebrate 500 episodes and then throw a grand part for the 1000 oneâ€™.