Sony's Jhalak Dikhhla Jaa has opened to a block buster average rating of 5.4 TVR which has propelled Sony Entertainment Television to a strong 3rd position among Hindi GECs. 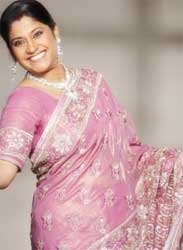 While the first elimination on Jhalak Dikhhla Jaa came as a shocking surprise with the popular singer Anushka Manchanda getting out, this week will see yet another gorgeous lady bowing out of the competition.

The show will now miss the beautiful and captivating smile of Renuka Shahane and she is the second contestant to go out.

Our source states, "Renuka's historical performance in the get-up of Bajirao Mastani last week, did not appeal to the judges and junta declared her as the next evictee. With this ends the journey of Renuka and Jai Kumar Nair in the show".

The contestants were given the theme of 'Folk' this week and the beautiful ladies Rani Mukherjee and Vidya Balan were seen as celebrity guests. They were there to promote their film 'No One Killed Jessica'.

Our source states, "Renuka was in the bottom two with Mahhi Vij. Ragini Khanna who has been giving average performances so far got her first 30 this week; her folk on a Tollywood number gave her the Best Performer of the Day Award. Ankita Lokhande danced on a Rajasthani folk number and was again appreciated by the judges. Daya Shetty and Vrushali did a Folk Bhangra, but the cop forgot few steps in between. Sushant Singh Rajput yet again proved his dancing caliber and got his second consecutive 30 as he did a Chao Folk dance. To top it all, he again won the Best Performer of the Day Award".

The elimination of Renuka Shahane will be aired coming Monday on Sony's Jhalak Dikhhla Jaa..

Ankita Lokhande urges everyone to join her and pray for Sushant Singh ...

Faryyy 9 years ago OMG I was so worried when you were at bottom 2!!!!
PLzzzz vote for Mahiiii she's so funny!!!

lira003 9 years ago Can someone please change the male host of this show? He is just...yaak

CrazyChatterbox 9 years ago renuka ji tried hard, but too bad for her... as for ragini, she finally got what she deserves, i hope she keeps getting full marks every week, and comes out top...

anki.shus 9 years ago hi sushant what a performance 30 out of 30 again i comment before about 30 marks best of luck

-raiAasma- 9 years ago Wow what a awesome news...ragz and sushi both got 30...so looking forward to the perfomance...!