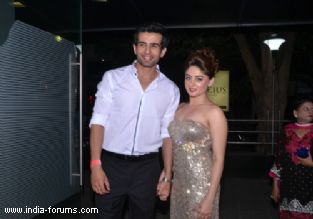 "I am really happy that 'Nach Baliye' has called us again," Jay told reporters here on Tuesday during the promo shoot for the show.

"This is the show ('Nach Baliye') where I proved myself as a dancer and people started taking me seriously as a dancer I am happy with that," he added.

However, Jay is praise for everyone.

"They all are doing fantastic. Half of them are my friends only. I am not going there to support them, but I have good wishes for all of them. Hope, the best couple wins," he said.

ampliphy 6 years ago Beyond excited to see Rithvik Dhanjani and Asha Negi rock the stage this week.

lizajo 6 years ago Rithvik Dhanjani & Asha Negi you guys just nailed your junglee performance. We fans are all set to go wild this weekend and vote like crazy!!