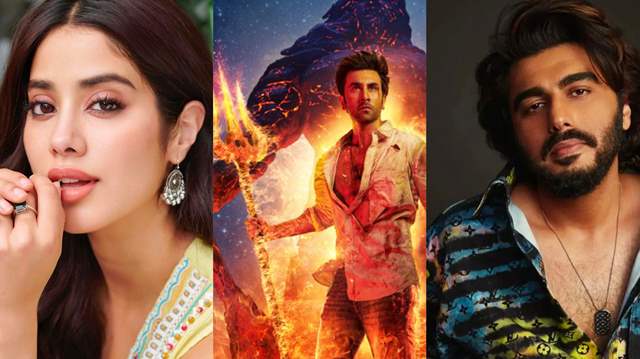 Bollywood's one of the most awaited film Brahmastra is finally making waves. The film released on Friday, and people from all quarters have begun giving their verdicts about the Ranbir Kapoor- Alia Bhatt starrer.

Not only fans but also Bollywood celebrities have showered praises on this cinematic marvel.

Now, Janhvi Kapoor, Arjun Kapoor and Varun Dhawan have shared their experience of watching the film, and it looks like they throughly enjoyed it. While Janhvi explained how good it felt to watch the film with the audience cheering, Arjun expressed that it was a ride like no other and Varun Dhawan urged fans to go watch the movie in a theatre to experience the magic.

Janhvi Kapoor took to her Instagram story and wrote,

“The sense of pride I felt while watching this vision come to life was truly overwhelming. It felt so good to be in a packed theatre with audiences cheering and hooting and whistling!!! The sounds of celebration and appreciation for a true labour of love. The hard work and passion and vision was magical to witness. Congratulations on creating something we can all feel proud to call a work of Indian cinema.”

The Ishaqzaade actor penned a long note as he wrote,

"An adventure for the big screen. A ride like no other. Loved being in a movie theatre & had a blast watching @ayan mukerji's vision come to life. My 2 favourite actors & humans set the screen on fire ([email protected]) @aliaabhatt#ranbirkapoor From The king Khans surprise emergence (loved it) to nag sirs action sequences to @ipritamofficial dadas score & music this one is a sure shot cinematic experience. Credit to @karanjohar @apoorval972 & the team at @dharmamovies for bringing this film to life..Cannot wait for part 2 !!!"

While Varun Dhawan shared a poster of Brahmastra and wrote,

“Congratulations team Brahmastra. Experience this only in the theatre. Truly bringing the magic of cinemas alive on the big screen. @ayan_mukerji the bgm the performances the vfx everything (clapping emojis).” 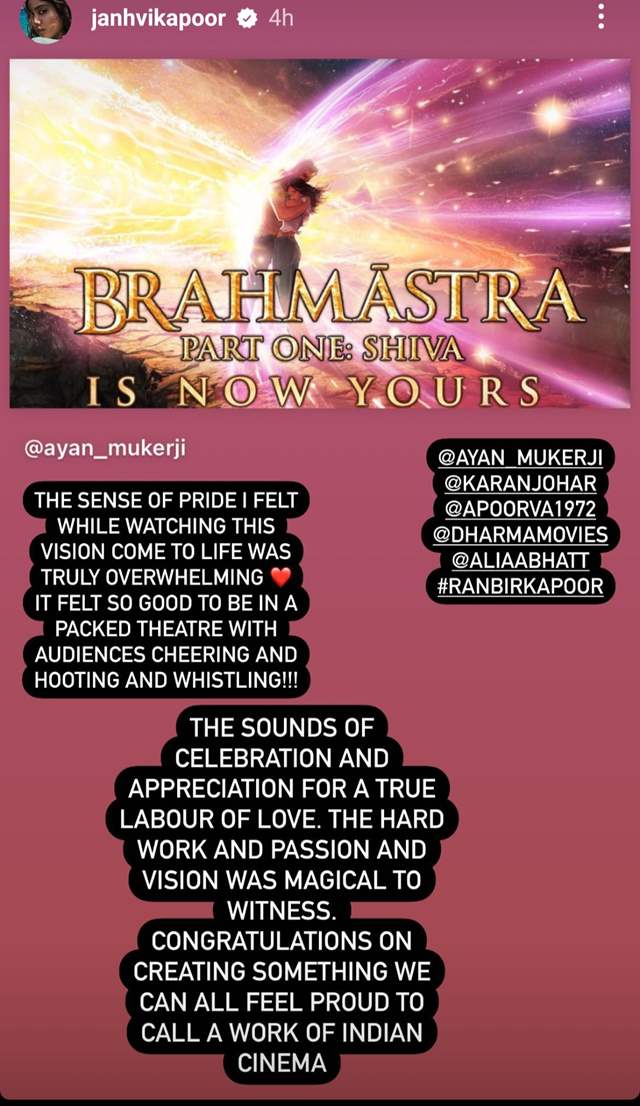 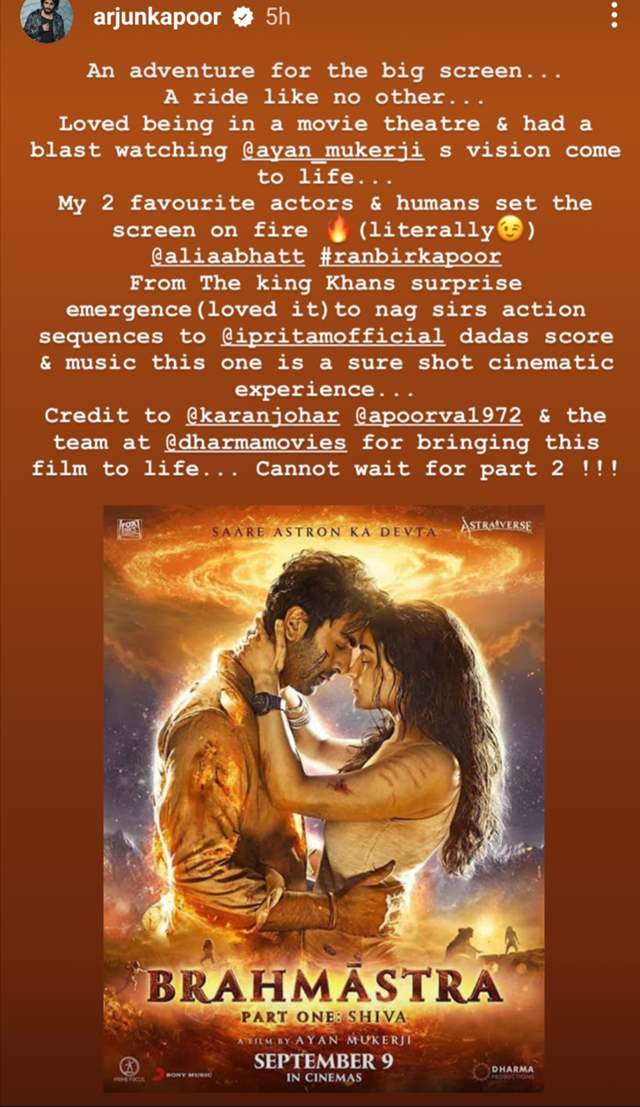 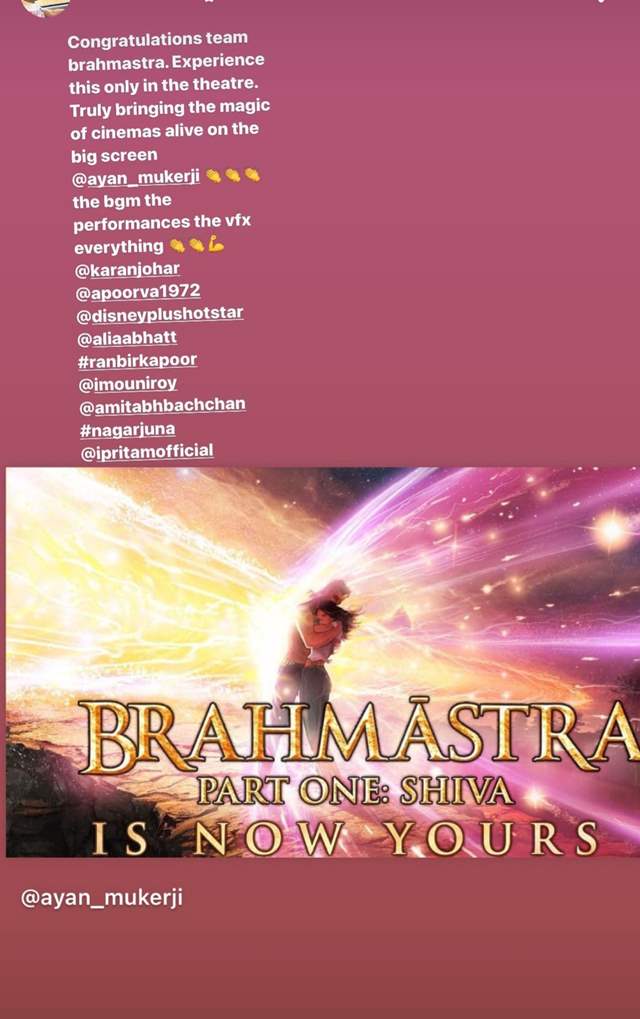 For the unversed, Brahmastra has a production budget of around Rs 400 crore, making it one of the most costly Indian movies ever made. The film is directed by Ayan Mukerji and produced by Star Studios and Dharma Productions, starring Ranbir Kapoor, Alia Bhatt, Amitabh Bachchan, Nagarjuna Akkineni, and Mouni Roy. Shah Rukh Khan makes a surprise appearance in the movie as well.

+ 4
2 months ago This bullywood is coming out to support FLOPastra. HrithikRoshan came now jhanvi then kapoor launda. All this druggies supports each other but no outsiders. Mouni Roy scene outdid their so called heroine and other superistar. They are adding tellywood to watch Bollywood movies and audience are giving this nepo terrorist money. They wanted to make dragon movie rumi but had to change it in end. Bramhastra bullshit lol more like drugastra making fool of audience. Bramhastra is not just a name it’s more then that.

2 months ago A cheap copy of Percy Jackson and The Olympians: The Lightning Thief. Anyone who has seen that movie will notice the similarities. These Bollywood dipshits thought no one would figure this out.

+ 3
2 months ago They just support their people… who cares for their opinions anyways.. biased opinions… if ur supporting the movie, then support each actor who r part of it… mouni too has a role as villian.. who is good actor compared to all these fake Bollywood people… Kangana was right about all these nepo people.. first thing is public should stop giving them complete attention ( which is very hard), then who will even ask them… poor Mouni she got just sidelined among the nepo people… now that’s y they add south ⭐️ in their movie, for people to tempt to watch… so done with these bolly movies… can’t even seem to watch any.. initially Jhanvi had said she has a huge crush on Ranbir Kapoor...so many girls after 1 playboy guy...with Alia dont think he will last for longest

+ 3
2 months ago Why didn't they talk about Mouni? She literally outshone all the other big actors despite those poor dialogues.

+ 2
2 months ago Lol... hoots should b for Mouni coz she outshined all the "superstars" of the movie

2 months ago "one of the most costliest", so which is the costliest ? I don't know anyone personally who watches or give a hoot to Arjun Kapoor or Jhanvi Kapoor have to say. The only movie I tried couldn't tolerate the acting past 10 minutes of Arjun & even the trailers seriously throw me off for Jhanvi, apple doesn't fall from trees - didn't apply to either of them unless you call their father an actor.

+ 3
2 months ago Only their people r supporting them no one else… what about Mouni… they took all other names , even she is part of it…There r lot of memes on the movie that bramhastra movie has all astras except storyastra🤣🤣🤣🤣

+ 7
2 months ago Seems as no one is watching their movies so now they themselves will be reviewing each other's work. Nice nice! #atmanirbharbharat