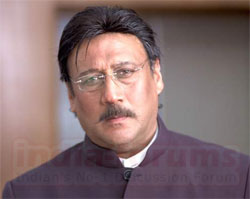 Jackie Shroff is a busy man these days. Oh, we are not speaking about his acting assignments but about his little know passion of organic farming. Not many people know that apart from acting Jackie is passionate about organic farming and thats the reason he spends quite some time at his farm house in the out skirts of the city. Revealing this little known side to India-Forums, Jackie says, "I have a keen interest in cultivating medicinal plants and my organic farming makes sure that I get enough to do on that front. Since, I have cut down on my film assignments, I spend most of time at my farm house. My other little known interest is to direct public service advertisments than commercial films since they help in spreading awareness among the masses." Ask him if he is planning to launch his own production house, Jackie quips, "At the moment I have no such plans, if I will it will solely be for raising social awareness."

On the film front Jackie is awaiting the release Rajkumar Santoshi's upcoming film Halla Bol in which he has a special appearance apart from a Holllywood assignment that he has signed.