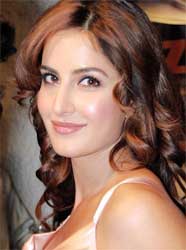 She may have starred in hit comic capers like 'Namastey London', 'Partner', 'Welcome' and 'Singh Is Kinng', but actress Katrina Kaif says she is yet to do an 'out and out comic role'.

According to Katrina, her character in 'Namastey London' was kind of funny but not a real comic role. 'I still haven't really done a comedy yet,' she said.