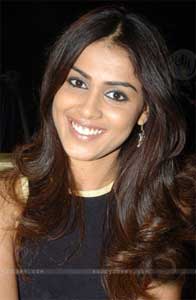 Actress Genelia D'Souza has done films in Hindi, Tamil, Telugu and Kannada - no big deal, did you say? She's delivered hits in all four languages - not bad! In one single year, she informs us - wow!

Ever since Genelia D'Souza, who celebrated her birthday Aug 5 took her first steps in Bollywood with 'Tujhe Meri Kasam' and down south with director Shankar's 'Boys', there's been no looking back for her.


'I delivered super hits in all four languages - 'Satya' (Kannada), 'Santosh Subramaniyam' (Tamil), 'Ready' (Telugu) and 'Jaane Tu... Ya Jaane Naa' (Hindi). I guess I'm the only heroine who delivered four superhits in four languages in one year,' she said.


The actress has another reason to be happy.

'I'm the heroine in all the three languages of 'Bommarillu'. The Telugu film was made in Tamil as 'Santosh Subramaniyam' and in Hindi as 'It's My Life',' she said.

Asked about which language she prefers, the actress replied: 'I enjoy doing films in all languages. Script is the first factor I look into. I don't mind doing a five-minute role if it's worth it. Secondly I should have a comfort level with the director/producer I work with. Language is never the criterion for me.'

Quiz her about how she keeps fit, Genelia says: 'I am basically an athlete. I was a state level runner and I played for the national football team. Hence, I am fit. I don't stay away from any kind of food. I love biryani, even if it's oily.'

On her much talked about affair with Riteish Deshmukh, she said: 'No, I've always maintained that he is a good friend. The press wrote what they wanted to but that hasn't affected our friendship. Besides, I am single.'