The vivacious and gorgeous looking actress Sonali Bendre is back again as a judge on television!! 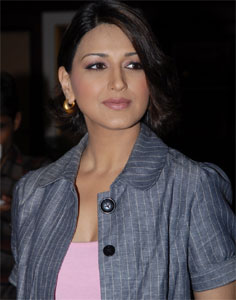 Featured Video
And this time she will give company to Annu Malek, Javed Akhtar and Kailash Kher as judge in Sony’s 4th season of Indian Idol that premieres on September 19th, every Friday and Saturday at 9 PM.

“I'll be judging the X-factor of the contestants”, says Sonali who was earlier seen as judge in Mr. and Ms. Television.  When asked the meaning of X-factor she explains, “There is no particular definition for it. But for me it will be the honesty and originality of the contestants that I'll be looking for in a person to enter Indian Idol show”.

How has been your experience as a judge of Indian Idol? “Well initially it was difficult for me as we are used to scripts as an actor. Over here it's all real, no script, no drama everything is spontaneous. Till now I have enjoyed myself and hope to do the same in the coming episodes”, she quips.

When are you planning to re-enter Bollywood? “My child is still very small and needs me. For now there is time for me to take some projects on silver screen, till then I'm happy doing my stint on television”, says the actress turned judge.

Look out for this space for more dope on Indian Idol 4.

14 years ago good luck to her, i liked her as judge on Mr & Mrs TV, even though this is a singing show i am sure see will do just as good

14 years ago oh wow she`s the judge for indian idol 4 anyways can`t wait and i hope this season rocks even more :)

afreen_14 14 years ago i used 2 like her wen she was actor looking forward 2 watch indion idol i really liked previous seasons hope there will be more fun in this season all the best 2 her...