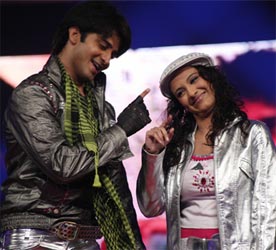 Featured Video
This episode of Kaun Jeetega Bollywood Ka Ticket will see a battle between the participant and the Mentor. No mark for guessing here and the team in question is that of Twinkle Bajpai-Puneet Israni!! The episode will see this controversial team taking their stance on the ranking given by the mentors.

Post their performance on this episode, which was appreciated by the studio audiences and the mentors Amrita Singh & Mahesh Manjrekar, the Eastern zone mentor Shabana Azmi was asked to rate the team. Shabanaji who was going strict with the markings said “There is so much rubbish that has happened on this show today. The team standing on stage is the culprit for creating this on such a platform that helps you realize a dream of being a part of a mega film, an opportunity that many would die for. Today I have decided that since I am given the authority and power, I will use it and teach them a lesson. I am going to give them the lowest scores I have ever given any Jodi till date”. Saying this she raised the card and gave the team score of 1 for their performance.

Twinkle Bajpai took it gracefully but asked the mentors why only her Jodi was punished? She pointed fingers at Naman Shaw and stated that he was the one who started the argument. Well, if this was not enough, Twinkle and Puneet who came back to the show after staging a walkout due to public demand were the ones who were eliminated this week… Wonder what happened to the public who made a hue and cry demanding her comeback???

When asked, Twinkle confirmed and said, “Yes this week I am eliminated. I am very happy because it was getting very stressful for me. I was sharing the bottom two with Chetan Hansraj this time, but when casting votes was in the hands of the contestants, they voted me out. If it would have been only in the hand of the public, then definitely the results would have been different”.

When Shabanaji was asked for more clarifications, all she said is that my scores said it all and I don't want to say anything else.

+ 2
14 years ago this show is not a reality show..it has more drama than balaji soaps

14 years ago thanx 4 the news but don't know why shabana ji gave them 1 but why did twinkle point toward naman?
what has he done?

14 years ago the elimination isnt shockin at all..im glad twinkle is out...now there could b some peace in the show..

14 years ago don't watch this show just seen snippets of it on aaj tak but from w/e i've seen its all drama... she did have an attitude...i think actually everyone on this show does...they take it to the limit on this show...like naman is gonna get into an actual fist fight with mayank...can it get more made up?

i think the whole public demand was staged. because i know most of the public wouldn't like their attitude and reckless behavior esp. puneet's.
good riddance!

14 years ago Well I know that Twinkle has had issues with her attitude.. but the one that annoys me the most is chetan's partner....She is the one that should go 100%...