The protagonists of ZeeTV's very popular show Chhoti Bahu, Avinash Sachdev and Rubina Dilaik share an amazing on screen as well as off screen chemistry. Also, an interesting fact is that they both celebrate their birthdays in the month of August. While Avinash's birthday falls on 22nd August, Rubina celebrates her birthday on 26th August. 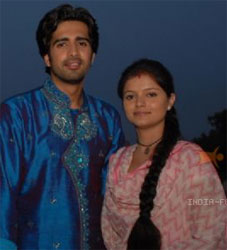 We talked to Avinash who said, "In fact, it is not just me and Rubina, but many in our unit have their birth dates falling in the month of August. So this month has us in a total party mood".

Ask him about his birthday party, and the actor states, "My friends from Baroda had come over to Mumbai; they gave me a surprise birthday party. They had also invited my co-stars and unit members. We had a gala time, and it was a great party. I then went on a drive with them to Lonavla and partied hard again".

The actor received many memorable gifts from his near and dear ones. But the one gift that surprised him a lot came from one of his fans based in Toronto, Canada. "I received a jacket from a fan named Harpreet who is in Toronto. It was an amazing feeling, which I cannot express", states Avinash with the thrill clearly visible on his face.

"I also got a blazer and a Pathani suit from my co-stars. Also, I gifted myself a brand new car, a black Tata Safari", he states further.

On the preparations for today's party on the occasion of Rubina's birthday, Avinash quips, "We are shooting cut-to-cut. So there is no time to party. However, we had a nice cake cutting session last night, and we plan to party tonight after our pack-up time".

Quiz him on the gift he will be giving Rubina tonight, and he says, "A big teddy bear, that's what she really loves".

Mili.. 4 years ago Avinash Sachdev lived as Dev wish you would come again as Dev