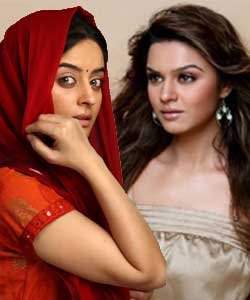 Dutta Bhau (Mishal Raheja) of COLORS' Laagi Tujhse Lagan has got back to his ferocious best, and is making life hell for his wife Nakusha (Mahhi Vij). As Nakku tries her best to make Dutta understand that she is the same old simple girl who he loved, the guy is getting more and more volatile and violent.

In the coming episode, Nakku will try her best to change Dutta's viewpoint towards her, but all will be in vain.

Our source says, "Nakku will put her old pictures in Dutta's room, wherein she is the dark girl. However, this plan yields no result as Dutta manages to pull off all the pictures and destroys them. He gets aggressive yet again and burns all the wedding pictures put in the album".

"In tonight's episode, Kala reveals to Nakku that she never wanted another girl in Dutta's life, especially a maid like her. Kala tells Nakku that it was she who instigated Dutta to get back to his violent self. She even reveals that she will destroy all the happiness that comes near Nakku", says our source.

Aashka Goradia confirmed the news saying, "Yes, Kala opens up to Nakku that she is responsible for her sob story".

Meanwhile, if sources are to be believed, Murli Sharma who earlier essayed the role of Anna will be back again to the show!! This time, he will portray the role of Anna's twin brother.

Well, it's now an open war between Nakku and Kala!! Let's wait to see what happens next..

Yuvika_15 9 years ago wicked war between the two...must say naku has gone beyond wt i expected didnt think she cud give this sort of takkar 2 kala..finally its gd 2 c sum1 stand up 2 kala n giv barabar ke takkar...lol

desigrl414 9 years ago Love both Mahi and Mishal! They are great in their characters! :)

The promo is awesome.wating for monday to come......

Sanely_Insane 9 years ago The promo is awesome.wating for monday to come......

Ashalata Wabgaokar passes away due to COVID-19
22 minutes ago

Zarina Wahab was Tested Positive for COVID-19; Actress ...
32 minutes ago