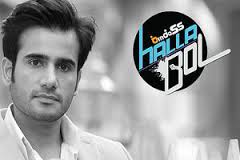 Bindaas' Halla Bol which had started a couple of months back is coming to an end. The show came up with a brand campaign 'B for Change' which highlights about bringing a change in yourself as well as in the society.

Bindass is known for featuring shows like Emotional Atyachaar and Yeh Hai Aashiqui which has a story and concept on the similar lines of Halla Bol. While these two shows focus on the young change-makers whereas Halla Bol is a women centric show which showcases the plight of women who have gone through some or the other trauma and mental disturbances in life. But the show highly encourages youth to fight for themselves.

Halla Bol has come up with an amazing episodes depicting the strength and power of a particular woman which makes them go long way in bringing a change in themselves and society. It is a show which has proven its ability in spreading awareness among the youth and women to fight back for themselves. This show has highlighted sensitive issues like eve-teasing and sexual harassment and being a youth-oriented show it has been loved and appreciated by its youth audiences.

The host of the show, a popular television actor Karan Tacker did a good job while hosting the show and shares his experience being associated to the show Halla Bol, "I loved working for Halla Bol, it was very interesting to see how women have fought back in their real lives and the self confidence through which they have stood up and bought a change in the society. The only reason behind joining this show was I had never done such a show and I wanted to encourage people for bringing a change in the society and spread awareness among the youth and women."

Thus with a good note let's sit back and enjoy the last episode of Halla Bol and try to follow the change which is needed in the society.

Bhumi- Rajkummar indulge in the 'Pawri' as they wrap up Badhaai Do: ...

6 years ago It feels as if it just started...the short journey of Halla Bol with Karan Tacker was amazing eye opener on lots of things...will miss Halla Bol

6 years ago Halla Bol was a very inspired show...will miss it & Miss Karan Tacker as Host..Karan Tacker u r doing gr8 job as Halla Bol host...When u host we can see d anger abt sexual harrasment on ur face...

+ 6
6 years ago it was agreat show even better than heros... infact yeh hai ashiqui should be go off air.. instead of repeating actors.. indian tv industry is never scarce of actors so its better to search for new faces rather than repeating old ones *dissapointed with bindas* for halla bol and yeh hai ashiqui

asmashaikh16 6 years ago Hallabol cme up with a grt concept nd all the epi wr very good !!!!
Grt shw with a Grt host !!!!
#karanTacker

aalyajuneja24 6 years ago Halla Bol is a very inspiring nd realistic show..I liked all the episodes ..nd specially the first of eve teasing starring Mugdha Chaphekar,I highly aprreciate her performance, her acting was very natural nd touching ..as well i like Karan as a host ,he did a good Job !!

+ 6
6 years ago I have not seen this show, but I really liked Karan Tacker as Viren. The best character of that show after Manvi. I also really enjoyed events he hosted for SP and I think he is very good as a host! I am sure he did a great job!!

Hope to see him in fiction again!!

+ 2
6 years ago It was an brilliant show with an amazing casting and a super hot host with an heart-touching but real concept ! Liked Halla Bol and love Karan tacker ! It will great if Bindaass continues to bring such amazing shows on TV.

@roadsidejunkey pls first try to use your brain for understanding such heart-piercing concepts.
P.S - No one is dying to read your comment :P