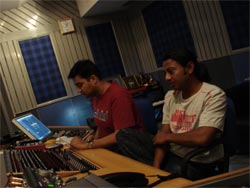 The shoot of Onir's 'Sorry Bhai' is moving at a fast pace with the unit working day and night at Mauritius, as they touch 20 days of their 40 day outdoor shoot. We talked to a very tired and exhausted Onir who gathered momentum in talk as he talked about the film's progress.


"Believe me, it's the most fruitful experience over", exclaims Onir. Talking about the star cast, he says, "It is a delight to be surrounded by so many talented actors who are not just good at their craft but are also wonderful people at heart". Onir who stood behind the camera for 'Bas Ek Pal' feels happy to step on the crane again. "It has been around one and a half years since I last called the shots. Now when I am back to what I love the most, it has been an incredible feeling. There were moments of frustration which used to come in during all these months when I was waiting for my next film to begin. Now that the film is taking a shape right in front of me, it is hard to describe the feeling", says a heavy-hearted Onir.

SORRY BHAI stars Sanjay Suri, Chitrangada Singh, Sharman Joshi, Shabana Azmi and Boman Irani in principal roles. "Each of them has been such an asset to the film", says Onir. He adds on to say, "They are superb to work with. The atmosphere has been so hassle free and fun filled. We are laughing and chatting away all this while and even though we are 20 days through, it seems that the time has just flown by."