The first week of Sony's Iss Jungle Se Mujhe Bachao has given the audience a great mix of adventure, palpable tension, some fun-loving as well as terrifying jungle tasks, and of course a good share of arguments and cat-fights between contestants. 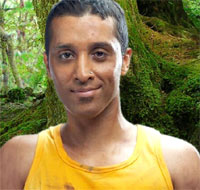 Featured Video
According to the format, every Friday will see the Elimination episode in which the two contestants placed in danger zone will have to fight it out in the 'Maha Jungle Challenge' and the one who succeeds will be saved, while the one who loses out will be shown the door.

Says our source, "IshQ Bector and Anaida were the celebrities who got the least number of votes. They were given a task related to aquarium activity, in which Anaida fared better than IshQ. With this, the rapper IshQ Bector bid adieu to the contest and to the jungles of Malaysia".

IshQ, the Indo-Canadian Hip Hop artist who is a singer, song writer, producer and performer has written, produced and sung music for films like Dhoom 2, Fight Club and Pyaar Ke Side Effects. He rose to fame with 'Ishq De', the music of which is popular even today.

The elimination episode will be aired tonight at 9 PM only on Sony Entertainment Television.

ptuisst 13 years ago it wasn't an aqua task.
it was physical strength and it had height and creepy crawlies.

13 years ago such a copy of the show im a celebrity get me out of here!

.Parii. 13 years ago This is exactly like the american show "Imma Celebrity get me out of here" !!

+ 3
13 years ago I guess they're deliberately keeping Palak and Fiza safe in order to increase TRPs.

13 years ago IS HE GAY or is he wearing a nose ring for fun. this show is a copy of "i'm a celebrity Get me out of here." such copiars.whatever it's like paisa ke liya kuch bi karaga. lolbu ti really wish fiza could get out. such attitude she got.

kiran-luv-DMG 13 years ago i wish fiza would be out in next elimination episode.........ishq was ny favorite...