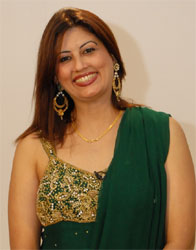 There is a surprise in store for viewers in tonight's episode of Sony's Iss Jungle Se Mujhe Bachao, as the second celebrity to be eliminated from the jungles of Malaysia will be declared.

The news coming in is that the most controversial candidate of Iss Jungle, Fiza Chand Mohammad has been ousted from the jungles this week. It looks as though Fiza's confession in the open about her troubled wedded life with Chand failed to generate curiosity amongst the masses.

According to our source, "Anaida who survived the Maha Jungle Challenge last week against IshQ Bector was again in the bottom two this week along with Fiza. As the two girls got ready for the Maha Jungle Challenge, majority of the boys rooted for Anaida to get back into the competition as she was a good team member and gelled well with all. While Anaida has been ready to take up the tasks given to her, Fiza has been walking safe from any kind of task till now, and probably this cost Fiza her place as she fell short of Anaida in the Challenge round".

Well, with Fiza gone, can we say the show will fall short of controversies? With Palak, Fiza's only confidante still around, we dare not say that!!

13 years ago yipee .. I am soo happie that fiza is out .. she really deserves to go .. nd that paalak oh sorrie shweta I mean palak is alone now .. yayyyyyyyy ..

+ 6
13 years ago woohhhhooo...!
fiza is out... i think palak shud also go... she is plain annoying man... (no serious offence intended, but really...)
and i like anaida... she is a tough gal... and good in completing all her tasks.. she shud stay till a long time on the show