View Profile
The much rubbished and highly ridiculed Khan rivalry between Salman Khan and Shah Rukh Khan now seems to be on a verge of a halt. For the uninitiated, The Khans (and the world) faced a high-pitched brawl at a birthday party hosted by Salman for his then lady love, Katrina Kaif, and what emerged was an out of control verbal war. The dispute reached such an extent that the outcome is still visible today. 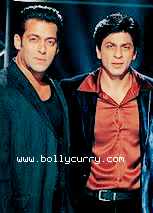 However, it  now seems like the cold war is slowly becoming a bygone. Once known as best buddies throughout Bollywood, the Khan duo obviously still look out for each other.
Be it Shahrukh praying his old-friend a speedy recovery or the latter wishing that SRK's Ra.One fetches better business than any of his films ever did, the two Khans make it obvious in one way or the other, that there is still some hope left in their reunion.
Although Salman refused to attach SRK's Don 2 trailors with his successful Bodyguard and proved yet again a well-known fact that he never is in a mood to forgive and forget, during Preity Zinta's chat show, Up, Close and Personal, she tried to make Salman fess up about the fall out between him and SRK. But, as always, the actor avoided the confession quite cleverly. And now that his surgery was declared a success in the US, Salman returned SRK's indirect wishes, whilst stating to a leading tabloid that he hopes Ra.One is a bigger hit than his Bodyguard.
Whatever the current friendship quotient is, Bollycurry wishes the Khans to let bygones be bygones and start afresh. Here's hoping they get back together soon!
Author: Garima M.
Editor: Jenifer.
Graphics: Shikha.