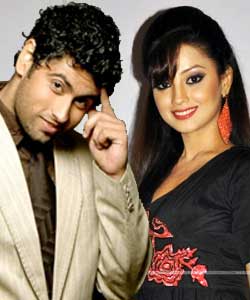 Adaaa Khan and Ankit Gera have been rumoured to be dating and spending a lot of time in each other's company. Adaa Kkan leads on Life OK's Amrit Manthan and Ankit Gera is all set to play the lead in 'Sapne Suhane Ladakpan Ke'.

Ankit Gera was previously in a relationship with Monica Singh but then called it quits. Rumours of the duo dating have been doing rounds for some time now. Tellybuzz decided to once and for all get the stars views on the news and put the matter to rest. We contacted Adaaa Khan who told Tellybuzz, " It's not true we are just good friend and we hang out with same group."

We contacted Ankit Gera who echoed Adaaa's sentiments -" Adaaa and I have the same set of friends and if I hang around with someone doesn't mean that I am dating. I got into Adaaa's group and we all hang out together: she is my very good friend."

Fans have been exposed to 'Just Friends' by their favourite stars a number of times – Is this another attempt to diffuse the undercurrent between the two actors? We will have to wait and watch !

ratifann007 8 years ago Please don't bring religion in it...no one these days see this Muslim-hindu relationship in bollywood and tellyworld industries...Examples
Hrithek roshan--suzane khan
SRK-gouri
Amir khan and his wife..Imran and his wife...
and from telly industry you would find many like Mouli-Mazhar,Aditi-Rizwan and Anas Rashid-Rati Pandey

*Dev.* 8 years ago Rubbish people who r bringing religion in this...oh pls LOVE do not have borders...if they r dating then i will be happy as THEY BOTH LOOK SO ADORABLE WITH EACH OTHER...

Sandy-Naz 8 years ago no one these days see this Muslim-hindu relationship in bollywood and tellyworld industries...Examples
Hrithek roshan--suzane khan
SRK-gouri
Amir khan and his wife
saif ali khan and his first wife
and many more...

sitakshii 8 years ago why to bring religion into all this ?????
such a downtrodden thought ...
if SRK has married GAURI ...so it means he committed crime ?????intercaste marriages are setting a great example of unity in our society ...Love is above all...i like ADA ...hope she choses the right person in her life .

Rehanism 8 years ago I agree that the media is always prepared to turn a mountain out of a mole, but why bring religion into this stuff? Its their life and they might date anyone they please..No one has got the right to pass judgements on this, especially on the basis of religion and community...

abhaylovepia 8 years ago is ankit gera and waseem are two differnt man, i thought they are one how same face, in pritgia ankit and in amrit mannthan i don't understand. secondly in india religion does not matter in marrages espically artist. you don't know?

raspberrytorte 8 years ago Adaa is a dedicated Muslim. I know she would never date a Hindu boy. So, can you not post stupid topics? What if Adaa's family see this? would they like it? Would you like it if you were Adaa and your family saw this? Think about others!