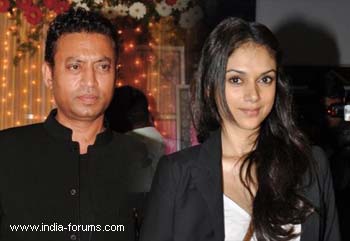 The film, produced by Anjum Rizvi, is set in Lucknow. It will have an earthy rustic language with the flavour of the city in it.

Nair agrees that the pairing is unusual, but will be the highlight of the film.

"We were looking for a young girl to play a street smart girl. Aditi suits the character perfectly. The pair would be one of the highlights of the film," he said in a statement.

"Irrfan plays a member of Saraswati Brass band that goes for weddings in Lucknow and he keeps on checking and wooing girls attending the wedding. People will see him in a light role after a long gap. I always had Irrfan in mind even while writing the script," he added.

The film is yet to get a title and will go on the floors soon. Aditi was last seen in Anu Menon's "London Paris New York" with Pakistani-actor singer Ali Zafar.