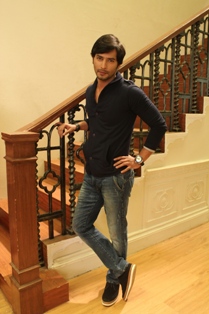 Humsafars on Sony Entertainment Television has an interesting track lined up to entertain its audience. The upcoming track will see Sahir Chaudhary played by Harshad Chopra organize a fashion show for his brand, Sayaara. Sehban Azim who plays Zaki, Sahir's younger brother, however has his own plans of making the fashion show entertaining for the audience.

Zaki, who lives in his own world and believes in enjoying life without shouldering any responsibilities, will come drunk for the show. With no control on himself, he will create a scene thus embarrassing his entire family.
Talking about the sequence, Sehban Azim says, "Shooting for the scene was really fun. I don't drink in real life so acting like a drunk man was a little difficult but I have seen other actors play drunk. My director also helped in enacting the scene. Zaki has his own style and he does things that he enjoys without thinking much about the repercussions. The character has a lot of layers  which will be unveiled in the upcoming episodes."
36 Likes

Ruhee110 6 years ago Awesome job Harshad Chopra as Sahir...keep it up

sophiam 6 years ago love you Harshad Chopra. ur doing Fab job As Sahir..

nayaba 6 years ago Harshad Chopra...you are an amazing actor...love you as Sahir!!! Wish you always the very best in your life.

kashrish 6 years ago Harshad Chopra, u r doing amazing job as Sahir...luv u

-Yasi- 6 years ago Harshad Chopra what a attitude...you rock as Sahir