Star Plus strikes once again with a one of a kind reality show, along with Synergy Adlabs, to fill up their entertainment slots. Post Kaun Banega Crorepati, its time again for the viewers to put on the thinking caps and test their knowledge only this time, the will need to go back time to recap all things learned in the 5th grade. Hitting the small screen soon is - Kya Aap Paanchvi Pass Se Tez Hain?, a reality show based on America’s famous show, ‘Are you smarter than a 5th grader?’. The show will be hosted by none other than the nation’s heart throb - Shahrukh Khan. Post the success of KBC 3, Shahrukh is back to cast a spell on the viewers but this time, with witted kids. 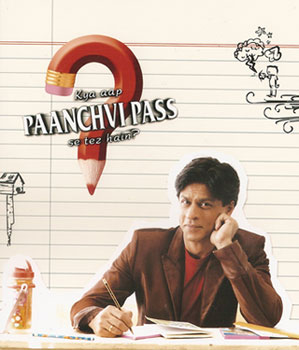 Featured Video
In this show, adults will be put to test to answer primary school questions, where the pressure of going back to school and keeping their reputations intact. In return, the contestants can win up to not one, not two but Five Crores. Speaking on the show, Shahrukh Khan States, “I was very keen to do this show because of the educational aspect to it, which has been an integral part of our culture. Once the decision was made, Star Plus was the only television platform I could think that could take me to every single television home in this country.” Adding to that Uday Shankar, the CEO of Star India Pvt. Ltd., said, “We are fortunate that the country has always given the mandate of taking television to the next level. With a show like Kya aap Paanchvi Pass Se Tez Hain?, It’s time to redefine India television yet again…”

Though the channel hasn’t announced the exact date of the show starting, the call for entries is soon to begin. Watch out as Telly Buzz brings you the latest updates on the new show.

14 years ago I watch the British version 'Are you smarter than a ten year old?' and it’s the hosts that make the show funny. I'm sure SRK will do well; he's very witty and fun, and it seems like he gets on with kids.

yingchuk 14 years ago i have seen the american version and love it. would love to see how SRK does well with the kids. When will the show get on air?

+ 2
14 years ago i know this is the indian version of are you smarter tha a fifth grader..dont we have any new original concepts than we copy another western show??

14 years ago It would be great to see SRK again on small screen!

14 years ago it will be greeaaaaattt to see srk bak on the small screen!

14 years ago i love this show! but a lot of the subjects that they have on the american version schools don't even teach them, at least not my schools.

14 years ago In the UK we have 'are you smarter than a 10 year old?' and it's brilliant and very addictive!

14 years ago I watch ‘Are you smarter than a 5th grader?' with my son. I think that this will be good. He will be able to see the show both in english and hindi. He is also a great fan of Shahrukh Khan. For him Shahrukh is the best and he will enjoy watching his big screen hero on small screen.