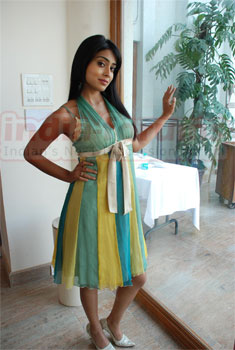 Shreya Saran's lucky stars brought her the superhit "Shivaji". Before that "Awarapan", which was released both in India and Pakistan , got her a good fan following in the neighbouring country. The actress believes films shouldn't be restricted to geographical borders. That's why, after wooing audiences in Pakistan, she has now set her eyes on Hollywood. Shreya would be seen in renowned film-maker Ashok Amritraj's "The Other End of the Line", also starring Jesse Metcalfe, Larry Miller and Sara Foster.

Shreya divulges little about her role. "It's an interesting character of a girl named Priya, belonging to an ordinary Indian middle-class family. The specialty is that she resembles me a lot. The girl is quite modern in clothing but traditional in values," she says. The film, also featuring Tara Sharma and Anupam Kher, is Shreya's first step into Hollywood.

Although Shreya doesn't feel there's much difference between a Punjabi and a South-Indian film, she distinguishes between Bollywood and Hollywood. She says the difference can be made out right from the final products.

In her personal life, Shreya believes that whatever the heart wishes for sincerely does materialize. Giving an example, Shreya says: "Before "Shivaji", none of my films were working. I wished from my heart that something good come my way and then there was Shankar sir offering me "Shivaji", which was the turning point in my career. In the future, I am ready sign up for any of his films blindly. "Shivaji" has also brought me much respect from other actors in the industry. Producers now troop in with good stories and roles for me."

Soon, Shreya would be seen in Sangeet Shivan's "Ek – The Power" with Bobby Deol, and in Apoorva Lakhia's dream project "Mission Istanbul" with Zayed Khan. About "Mission Istanbul", Shreya says: "I am playing a journalist in this film who collects news about India and Istanbul . I have not yet started preparing for this role. Can you tell me how do you journalists feel when artistes like us do not reply to your questions properly?" The character that Shreya plays is very tactless, she often says things without meaning them or thinking much. Without revealing any more about the film's storyline, Shreya sums it up saying "It is a story from India, which goes all the way to Istanbul."

After working with the southern megastar, Shreya now also wants to work with the superstars of Bollywood. "I welcome all film-makers who can offer me interesting roles," the actress smiles. As of now, she is working in South-Indian films with Vikram and Vijay. 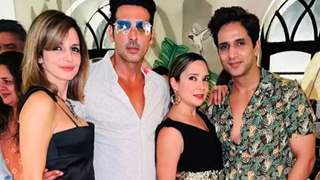