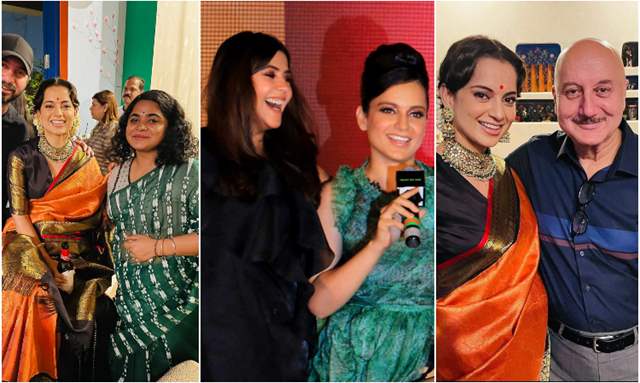 Bollywood actress Kangana Ranaut is an avid social media user and she celebrated her 34th birthday on Tuesday after the trailer launch of her upcoming film ‘Thalaivi’. Later in the evening, she was snapped attending the Thalaivi trailer launch in the city. Post the trailer launch, she was seen celebrating her birthday with close friends at her residence in Mumbai.

Now, Kangana has shared glimpses of her birthday celebration on her social media handle and even reposted Anupam Kher’s video on her Instagram story. The Tejas actress also gave her fans a sneak peek into her party and shared a cool video. Kangana in her recent Tweet, shared more pictures from her celebration.

Check out the pictures and videos below:

Kangana, on Monday, shared pictures of her massive physical transformation as she impressed her fans with her new retro look as Jayalalithaa. The upcoming film features the late politician's journey from being an actor to becoming Tamil Nadu CM. Kangana left no stone unturned for getting into the skin of former Chief Minister J. Jayalalithaa. From the looks of it, the Panga actress underwent a massive physical transformation and the recent stills from the biopic will blow your mind.

Meanwhile, Kangana broke into tears at a media interaction in the city while praising AL Vijay, her director in the upcoming political biopic 'Thalaivi'.