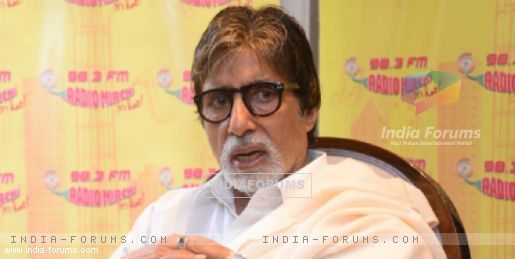 Cinestar Amitabh Bachchan, who has been roped into field publicity for DD Kisan, says he has in the past tried to save some farmers' homes, but he asserts that collective efforts need to be made to battle the grave issue of farmer suicides in the country.

A record 1,306 farmers committed suicide in Maharashtra during the one year of Prime Minister Narendra Modi in office - between May 20, 2014, to May 25, 2015, according to a farmers' watchdog body.

"It is a most sad occurrence to hear of farmer suicides. I have personally tried to do my bit in trying to save several homes by paying off their debts -- around 40 families in Andhra and around 50 in Vidarbha. But individual effort is not enough," the 72-year-old told IANS.

"I do read and believe the government of India is seized of the situation and are doing their best to fight this unfortunate happening," he added.

There has been news that the thespian will feature in audio-visuals and radio jingles to promote the newly launched government-backed channel for farmers.

Talking about it, he said: "DD Kisan is a new TV channel for farmer-based programs by Doordarshan. I have worked in the campaign launching of the channel."

The idea for the actor's involvement for the channel is said to have come from Prime Minister Narendra Modi, with whom Amitabh closely worked on the Gujarat tourism campaign.

But he said, "The Honourable Prime Minister has not approached me personally" to endorse DD Kisan.

The Uttar Pradesh Seed Corporation then registered the iconic film actor as a farmer-member and provided him with a hybrid seed programme for his land, which got a yield of 200 quintals of wheat thanks to advanced tractors, threshers and other equipment.