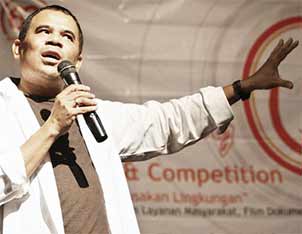 Indian film songs and dances have had a huge impact on Indonesian films over the years, but their popularity has dwindled lately as more films take the western approach, award-winning Indonesian filmmaker Garin Nugroho has said.

Nugroho feels that Indian filmmakers, when inspired by their own country's rich culture and heritage, produce films that resonate better with Southast Asian filmgoers.

He was here as a delegate at the 19th Kolkata International Film Festival (KIFF) that began Sunday. Seven of his critically-acclaimed movies are being screened at the festival that this year, which has south-east Asia as its special focus.

"And if you see competition with Indian cinema 20 years ago, it was very popular, but now it is decreasing and decreasing because nowadays they are going the way of the west, and that has become a problem," Nigruho told IANS in an interview.

"India has a big market in Asia... they were strong before, but now they are losing the Asian market."

Among Nigroho's films chosen for the KIFF is the 2006 musical "Opera Jawa (Requiem from Java)" inspired by the abduction of Sita (wife of lord Rama), from the Ramayana.

Nugroho explained that the film is proof of the appreciation of Indian (Hindu) epics Mahabharata and Ramayana among Indonesians.

According to the director, because of the prevalence of Hinduism in the archipelago, the cultures of the two countries share similarities which reflect in the love for Indian films in Indonesia.

"People love it, the films come from a place with the same roots. Indian films are very popular in my country and have influenced our cinema deeply. The Mahabharata, Ramayana and the song and dance are loved there... the heroism of people in Mahabharata and Ramayana is specially appealing," he says.

"Of course they (Indian dance sequences) are influenced by Hollywood, and then transformed in a new perspective for Indonesian dance."

However, he points out that currently, audiences in his country are bereft of the parallel cinema of India, which according to him is "a true reflection of human expression."

"With the current films, the problem is that we know only the popular films from India. We don't see much of the alternative films. India needs to tap into its own culture... there is so much there and that will find a greater acceptance across Asia," said Nugroho, a fan of masters like Satyajit Ray and Ritwik Ghatak.