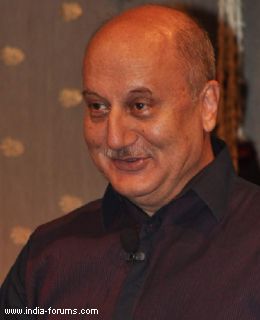 New Delhi, Oct 9 The magnetic effect of India's culture and cinema will continue to draw the Western world, says veteran actor Anupam Kher, who has reached out to the domestic and international market through several crossover projects in the last three decades.

'India is now considered an economic cultural hub. We have a lot to offer to the West in terms of cinema and also on a personal level. The richness and colour of our culture have a magnetic effect on them. So it is very important to keep the Indian flavour alive, especially through crossover projects,' Anupam, 56, told IANS in an interview.

Some of Anupam's past crossover films include 'Bend It Like Beckham', 'Bride and Prejudice', 'The Mistress of Spices' and 'The Other End of the Line'.

Of Bollywood's collaborations with Hollywood, he says he is glad that the international market has begun to realise India's cultural potential.

'Foreigners, Hollywood or even European people now understand the reach of the Indian market. They know that business-wise they have a big market here and they can release a film here also. That is why now films are released worldwide on the same date.

'I also feel that we can look forward to more collaborations now than what we could have five years back. But it's just the beginning. It will take time...after all, change does not happen overnight. Change takes time, but we are on the right track to reach those heights,' he said.

The Padma Shri awardee arrived in Bollywood with his powerful performance in 'Saaransh' in 1984. From playing a villain to a comical guy and character roles, he has a variety of performances under his belt.

The versatile actor feels the filmmaking business has changed over time.

'The business has changed a lot. Earlier, the audience was much more forgiving - they gave time to actors to establish themselves - but now it's a completely different ball game.

'Now, it is time for only those people who know their job well. Only they can stay and survive in cinema. That's why intelligent filmmakers like Dibakar Banarjee, Anurag Kashyap and Neeraj Pandey are now finally being accepted. So, play time is over now, the filmmaking business is for people who know their job,' said Anupam, who also runs an acting academy.

(Manpreet Kaur can be contacted at [email protected])