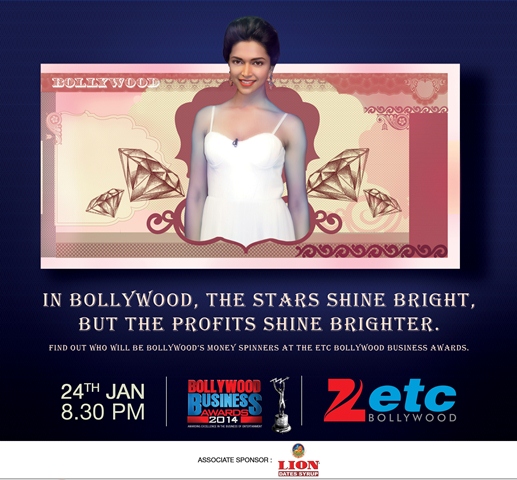 ZETC Bollywood Business Awards is back with a bang in its 5th edition. Setting the podium for the ultimate accolade in film making, ZETC Awards recognizes the best in class talent across some of the most diverse categories in film making. Recognizing and rewarding scions of Indian film dom like Salman Khan, Deepika Padukone, Rajkumar Hirani, who've hit headlines for their ace delivery in the year gone by, will be racing for this esteemed title.

ZETC Awards is the only award function in the country which identifies and honours winners purely based on their box office success.  Since 2010, the ZETC awards has been received exceedingly well, given its unique identity of being the only award function based completely on meritorious grounds. The award stands for an unbiased and commercial success oriented metric system without the involvement of a jury.

The ZETC Awards foundation is based on parameters that comprise of -

Recognizing marketers, distributors, production houses and exhibitors who are equally responsible for the success of a film, along with actors and directors

A winner judged solely on the basis of business garnered

Anurag Bedi, Executive Vice President & Business Head - Zee Entertainment Enterprise Ltd. said, "ZETC Awards is another commitment delivered, towards recognizing some of the most talented personalities of the industry. ZEEL is proud to have had a great success ratio with these hallmark awards since launch. Currently in its 5th year, ZETC Awards aims to bring to the Indian TV viewer, a power packed evening bringing together industry bigwigs under one roof"

Speaking about his longstanding association with the awards, Komal Nahta, Host - ZETC Bollywood Business Awards 2014 said, "Our single focused attempt of recognizing money-spinners of the Hindi film industry continues to remain, We take pride in being the only award function that honours box office numbers purely based on factual figures. I'm looking forward to delivering another ceremony duly recognizing efforts of our talented filmmakers"

With the objective of reaching out to the diverse Bollywood fan following, the viewer engagement plan has been carefully designed keeping the digitally active audience in mind. In order to increase dialogue with our global fan base, in 2015 the awards committee will focus on taking the concept closer to the viewer innovatively. Raising curiosity level days before the ceremony, social media will be abuzz with Facebook contests, posts, tweets and e-mailers.  Various social media activations will keep fans updated for the awards night while they will also stand a chance to win exclusive merchandise from Zee through various contests.

+ 4
9 years ago Mostly SRK...Yayyy Love all his movie they surely leaves a Mark on your Heart...&lt;3

+ 3
9 years ago OMG!! Mostly SRK-Kadz movie lines.!! eeksss..can't get over the DDLJ pic..It has been SOO LONGG,yet the movie is STILL SO FRESH ! always!!

9 years ago SRK Rules!!! Love all his romantic lines :D

+ 3
9 years ago OMG all of them is almost SRK dialogues that is what call true King just love u SRK... hope to see more...

9 years ago shahrukh rockzz!!
u r te most romantic actor of bollywood.
luv u!!!