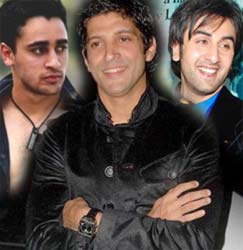 Imran Khan and Ranbir Kapoor share an amazing chemistry as friends. Their comfort level was very much apparent in the Filmfare Awards!  They rocked the awards show, and since then, all Bollywood fans are dying to see them together onscreen.


Well, apparently their wish has come true.  The 'Luck By Chance' director Zoya Akhtar is working on her upcoming film that portrays the beautiful friendship between three friends.  Farhan Akhtar has consented to play the role of one of the friends, and the buzz is that Ranbir is very much happy with the script of the movie.  Likewise, Imran is also talking to Ranbir so they can sort out their schedule and sign the movie.
With three heartthrobs - Farhan, Imran, and Ranbir - coming together for the next Excel Entertainment's venture, we sure hope that this movie will be a huge success like the banner's previous blockbusters (Dil Chahta Hai, Don, Rock On).
Featured Video