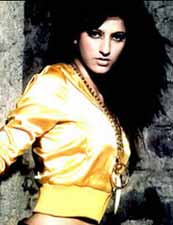 Bollywood is filled with funny things.. Break ups, hook up and soo on. It’s quite funny and entertaining to see fathers of actresses still romancing with girls of their daughter’s age. Well this is an old news what’s new is, Kamal Haasan’s daughter Shruti Haasan who was recently seen in Verve Magazine India Cover as “Rocking Debutante”, has signed her first Hindi film “Luck” with Imran Khan. Shruti is an Indian singer turned actress; who made her debut in bollywood as a singer, in the Hindi feature film Chachi 420.


“Luck” is produced by Shree Ashtavinayak Cinevision Ltd and directed by Soham Shah. The other stars include Mithun Chakraborthy, Ravi Kisshen, Sanjay Dutt, Rati Agnihotri and Danny Denzongpa. Most of the shooting for the film will be done in South Africa.


Imran Khan and Shruti Haasan are childhood friends, it was also said that Imran Khan recommended her for the role. After Jaane tu and kidnap I hope “Luck” is on the side of both these friends..!!