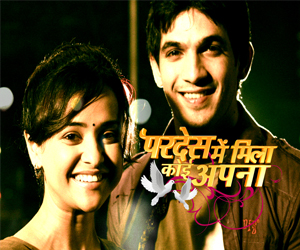 Announcing the show, Saurabh Tewari, Head Programming-Fiction, Imagine TV, said "Pardes Mein Mila Koi Apna is a slice of a life story about Mumbai seen from the protagonist, Nirupama's point of view, and how she deals with the various trials and tribulations of a city life. The plot revolves around people of various sections, backgrounds and socio-economic status. It focuses on the day-to-day life style, the problems they face and how they overcome them. And amidst all this is Nirupama's love story with Chandu. We are optimistic that this unique story will surely resonate with the viewers."

After Miley Jab Hum Tum, Arjun Bijlani plays the charming boy, Chandu, in the show. Happy to be playing a Marathi boy, Arjun says "I am happy that I am playing a Marathi boy because my mom always wanted me to do a show with a Marathi family. Hence, I dedicate this role as a tribute to my mother."

With this show Bhavna Khatri is back again in Imagine TV in the lead role, Nirupama. "The role is really bold and strong when compared to Jamunia who has a great bonding with her father and the main reason she shifts to Mumbai is for her father's better medication." says Bhavna.

After portraying the royal Prince Yudhishtir in Raja Ki Ayegi Baraat, Kapil Nirmal is all set to portray Sarje Rao, the aamchi Mumbai and speaking about the role Kapil says "I play the character of Sarje Rao in the show who is a brat in the show but ironically born to a cop family. He loves his brother Chandu but has a problem with the other members of the family."

Speaking about the character and the novelty in the looks he says "In this show I am born in a Marathi family and I have certain dialogues in Marathi. I am learning the language and my costars are really helpful in that regard and I like it."

The show looks promising with the main cast and the with various other theatre artistes involved in the show.

The will go on floors from 1st February at 10:30pm on Imagine TV.

--Sanchu-- 9 years ago Arjun is a brilliant actor and is extremely good looking.Thanks for casting him as Chandu!
All the best for your new show...all the best to the entire team of PMMKA!

darshana23 9 years ago hi kaps, waiting to see u onscreen soon as Sarjerao

well-wisher 9 years ago You are going to do full justice to the character of Chandu...you are going to rock as usual....& you are looking too cute in your get up as Chandu.

Sanjay Gagnani tests negatieve for COVID 19, to resume ...
30 minutes ago

Gurmeet Choudhary and Debina Bonnerjee test positive for ...
42 minutes ago