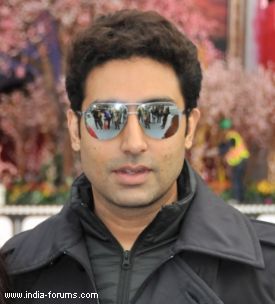 Actor-producer Abhishek Bachchan says he wants to stick to acting and not switch to directing films as he believes he is not qualified to don a director's hat.

Abhishek, who had earlier produced the 2009 film "Paa", might be good with numbers but says he doesn't know the art of directing films.

"No, I don't know direction. Direction is something which you have to learn before. Besides, I am happy being an actor. I am loving what I am doing. I don't think I am qualified to be a director. If I ever decide that I need to direct a film, I will probably go and train myself first in that," Abhishek told IANS.

He is also trying to enhance his acting skills.

"I see my films everyday to learn, to improve myself. I make notes and see what I can do to make it better. Today, when I see 'Bol Bachchan' I see clear mistakes. There are so many things today I am equipped to do ever better," said the 37-year-old.