Her 2007 debut vehicle 'Saawariya' sank without a trace at the box office, but one-film old Sonam Kapoor is unperturbed and says she is no underdog. 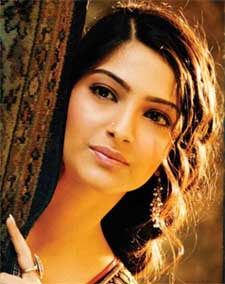 Featured Video
I did my first film with Sanjay Leela Bhansali and my second film 'Delhi-6' is with Rakeysh Omprakash Mehra. These are big names and I am on top of the world. I am not at all an underdog. I am Anil Kapoor's daughter. I was born with a silver spoon in my mouth,' Sonam told reporters here Friday.


Sonam was speaking at a press conference for the 54th Idea Filmfare Awards 2008. She was here to promote her forthcoming film 'Delhi-6', releasing next month.


Sonam maintained that though 'Saawariya', which was released in 2007, failed to click at the box office, it brought her critical acclaim and she 'got whatever she needed from the film'.


The 23-year-old actress stressed that she is very much in the league of young actors like her 'Saawariya' co-star Ranbir Kapoor and Deepika Padukone, who debuted same year with hit movie 'Om Shanti Om'.


In fact, Deepika walked away with the Filmfare award for best female debut last year.


'Awards are important and it was important for me to win one for 'Saawariya'. I was quite upset that I didn't get the award,' she said.


Sonam, who has recently signed a comic caper 'Come On Pappu' with Akshay Kumar, finds comparison with Deepika unfair.


'I can't compare myself with Deepika. She is doing mostly commercial roles and I am not. She is signing more films, but I want to do one film at a time. It takes nearly a year for a film to be made and that's why I am being seen lesser than her,' said Sonam.