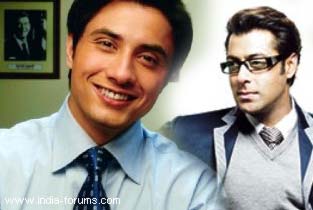 Mumbai, Sep 18 Pakistani singer-actor Ali Zafar, who is slowly making a foothold in the Indian film industry, says he is a big fan of Bollywood star Salman Khan.

'I'm a big fan of Salman Khan. If I ever do an action film, I would love to do something that Salman does. For that I would have to work very hard on my body but I'll try to do that,' Ali told reporters here.

The 31-year-old, who made his Bollywood debut with a small-budget film 'Tere Bin Laden', went on to grab a role in Yash Raj Films' 'Mere Brother Ki Dulhan'.

Currently he is filming for yet another Bollywood venture 'London Paris New York', being produced by Goldie Behl and Shrishti Arya and helmed by newcomer Anu Menon.

Although she made her Bollywood debut with 'Delhi-6', Aditi Rao Hydari got noticed in Sudhir Mishra's 'Yeh Saali Zindagi', not just for her performance but also because of her multiple lip locks with co-actor Arunoday Singh. Now the actress says that she has problems doing intimate scenes.

'In 'Yeh Saali Zindagi', all the kissing was completely valid, very organic to the film. I think it's the intention behind whatever scene you put in the film and if that is an honest intention, it doesn't upset either the viewer or the actor in any way,' Aditi said.

'If a film demands an intimate scene and there isn't any, viewers will only feel what's wrong with these people, which world do they live in? So sometimes it's necessary and if it's done beautifully, it's lovely to watch and it's fine,' the actress told reporters here.

Aditi will be next seen in 'London Paris New York' opposite Ali Zafar.

I have changed a lot as an actor: Kalki Koechlin

Kalki Koechlin, who entered Bollywood with Anurag Kashyap's 'Dev D' in 2009, says that she has evolved as an actress in these two years.

'I have changed a lot. As an actor, in 'Dev D' I was very camera-conscious, I was scared to do anything. I was scared to ask for a second take, I just wanted to get the lines right.

'I'm getting involved in the characters. I'm becoming bolder in terms of talking to my directors if I don't understand something. If I want to try something new, if I have an idea, I speak out,' the 28-year-old told IANS.

After 'Dev D', Kalki has played pivotal characters in films like 'Shaitan', 'Zindagi Na Milegi Dobara' and 'That Girl In Yellow Boots'.