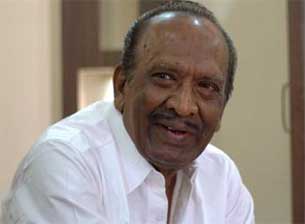 Veteran writer-filmmaker J. Mahendran, who is teaming up with maestro Illayaraja for the 12th time for a yet-untitled Tamil project, says the music of the legendary composer has been the soul of his films.

Mahendran and Illayaraja have collaborated for films such as "Mullum Malarum", "Pagalil Oru Iravu" and "Johnny".

"Usually, filmmakers rope in Illayaraja expecting some chartbusters, but I have never demanded hit music from him. His music has been the soul of my films for over a decade now. We have worked in eleven films and the music of each album is special," Mahendran told IANS.

"Our relationship has gracefully aged with us. I narrate all my stories first to him and then to others. This has been a ritual and it continues. After reading my story, he would suggest a suitable title. He will also suggest a title for my latest film," he added.

He says the composer's music becomes the narrative in his films.

The 74-year old filmmaker, who has worked with superstar Rajinikanth predominantly, has decided to work with newcomers in his new film.