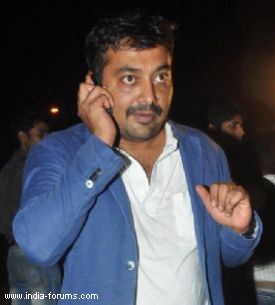 Filmmaker Anurag Kashyap says he will fight till the end against the Censor Board's objection to his refusal to add anti-smoking disclaimers in his upcoming directorial venture "Ugly". And if the need arises, he will even approach the Supreme Court.

Kashyap has filed a petition in the Bombay High Court against the Central Board of Film Certification in the regard, and he is not willing to release his film with such disclaimers.

"What I feel is (that it is) very unfair. It is absolutely mindless and pointless. If the Bombay High Court does not agree to it, I will go to Supreme Court," Kashyap said here in an interview.

Produced by DAR Motion Pictures and Phantom Films, "Ugly", was earlier slated to release Oct 11 this year but then the release was moved forward to next year as the filmmaker was not willing to carry the anti-smoking disclaimer in the smoking scenes in the film.

"I don't want to release "Ugly" with those (anti-smoking) notifications.

"I have to fight till the end. I have my right to expression. I make my films and in this country, being a democracy I think I am going to pitch my fight till the end to see that what comes out of it because somewhere somebody has to stand up and fight against it," he added.

Known for films like "Gangs Of Wasseypur", "Dev D", "Gulaal" and "No Smoking", Kashyap also said that such disclaimers are an insult to anybody who takes his work seriously.

"Warning (disclaimer) is not just distracting, it is a downright insult to anybody who takes his work seriously.

"I take my films very seriously and I feel it is very insulting that there is a key moment going on in my film and suddenly that logo (disclaimer) appears," said the filmmaker.

Charvi Saraf is finally happy that her character got a ...
24 minutes ago