View Profile
Shah Rukh and success have become quite synonymous with time proving the winning mettle of the King Khan in Bollywood. The star has now become an ideal for youth struggling for winning a place not only in the film industry but also in other sectors. Let us know about the recipe of success from the King Khan himself. Is it ‘luck’ or ‘hard work’ that is required for attaining success? 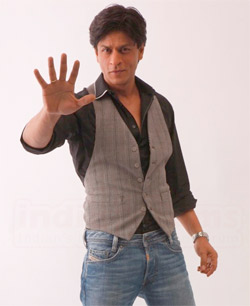 
“See, success, with me, looks easy as I always prefer to stay smiling. Actually, while pursuing success, one always has to keep in mind the negative outcome of his effort. Now, take for example a bad guy. While he does something for his business, does he think of it as executing bad things? Not at all. Actually, he looks out for his justification and then never feels bad for anything he does. In the same way we also can do anything keeping in mind the positive aspects of the matter but at the same time we cannot forget the disarraying aspects the project can lead us to. You must witness the increment in your confidence while you convince yourself for something positive. Being so positive, you do perform better, too. We always try to make things better in our lives despite knowing the fact that we all are going to die one day. Every morning we get up from the bed thinking about getting better things, then, can’t we follow the same process in our job also? If we can do something with this intensity success will never be a far cry. As far as the role of luck is involved, I would like to say that hard work is needed to satisfy luck, also” explains Shah Rukh.

In addition to incorporating hard work and luck for getting success, Shah Rukh knows very well that Bollywood is the place where combination of beauty and talent produces the best result. But while Shah Rukh entered this industry the most industry guys found it hard to see beauty in him. That’s the reason behind his success being known as that of real ‘Baadshah’! How does Shah Rukh accept the fact?

Shah Rukh takes few moments and then replies, “People say that my luck plays a big role in getting me success. But I feel that I am not at all an important person. Yeah, seven or eight years back, I felt like a real special. But whatever I have achieved after that period were only due to the love of my audience.”

Still embracing the ‘Kindergarten’ award, he got at the age of two and half, Shah Rukh always dreamt about winning in life. Along with winning millions of hearts, Shah Rukh won the Filmfare award as the best newcomer for his character in “Diwana”. Since then Shah Rukh has proved example in winning at every step of his life. Now the question arises as what is his inspiration of having so much faith in winning!

He looks little serious and says, “truly speaking, it’s very easy to play blasphemous after winning in life. There are examples of many people who cannot win despite working very hard and the sole responsible behind their losing remain circumstances. Every human being leaves his bed in the morning thinking of winning only. Many amongst them get the chance to win and I am just one of them. There’s nothing extra-ordinary about it. I would tell you only that as I am enjoying my success, I’ll enjoy the moments of my failure also.”

We will talk about your failure later but, for the time being; let us talk about your success mantra only. Shah Rukh concludes saying, “I am pretty scared of these things. Recently I have gone through the Economy Times describing that Shah Rukh is an excellent businessman. But I never felt like that. I am still the same person as I was years ago. Still, my family is my only priority.”