Yash Tonk and Gauri Tonk, runner-up Jodi of Nach Baliye Season 2 are back in the reckoning this year, as they enter the show tonight as Wild Card. Yash will also be seen in Star Plus’ new reality show Arre Deewano Muje Pehchano, premiering 2nd January 2009.

Here is the actor talking to Telly Buzz about his twin entries in reality shows.. 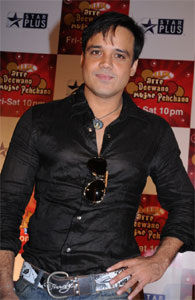 Featured Video
You are again going to be seen in Nach Baliye with Gauri. Your take on this.
I have always loved the Nach platform, and when they called me to participate as a contestant again, I could not refuse. We entered thro’ a format called ‘Badle Ki Aag’ wherein one Jodi from any previous season would get entry.

How long do you feel you will be seen in the show?
Well, we will be there till the audience want to see us (laughs). We have entered as one of the contestants, and will compete with this season’s contestants. The format will be same for us like other participants.

Do you think it is fair enough for you to get another chance at grabbing the coveted trophy?
Well, I personally feel it is unfair for us, as we enter the fierce competition eight weeks after the start. The other contestants have already warmed up for the occasion while we enter now. Above all, we are not professional dancers who get to dance everyday. We are back to Nach after two long years, and we have entered at a stage where competition is at its highest.

What are the major differences you find when you compare this season contestants with the second season?
In our season, most of them were working in dailies of Star Plus and knew each other very well. We used to rehearse and mingle a lot. This season, I am elder to all of them by two years (laughs). I hardly know any of the contestants, so I can’t say anything about them.

You were the runner-up Jodi of Season two. So how do you think audience will react to your comeback?
I would like to tell only one thing to the viewers. Please vote for us, if you really like our performance. If you feel any other jodi is more deserving, then vote for them. Vote for our performance, and don’t go by past records.

What do you want to say about your other reality show on Star Plus?
Arre Deewano Muje Pehchano is a unique fun experience, where celebrities need to dress up and play pranks on people. I accepted this reality show as it is very different and challenging too.

After the dance reality shows, you are into the comedy genre now. So what is in store for Yash next?
All is going to be quite hectic now. I need to shoot the whole day for my daily soap. At night, I will be rehearsing for my reality shows. ‘Ab aur kya kare, time hi nahi hai’. And if I enter a singing reality show, people will surely commit suicide (grins).

+ 5
13 years ago Yash Tonk is so funny- love the end of this article where he says that if he enters a singing show, peopl will commit suicide- rofl!! Can''t wait to see him in NB4- he is so sweet to say just vote on the basis of our present performance not our past performances!! That reality show shounds funny, I wonder what he will dress up as, and what pranks he will play on people, LOL!! xx

13 years ago wish them the best on NB!

13 years ago i loved their jodi n want them to win but bad luck but they come this time i can bet they wont win n its not fair to the other jodis!

13 years ago oh wow!! niceee.. competition is back for shaleen-daljeet now.. i love dem..

13 years ago I loved previous NBs but for NB4, its a disaster so Yash-Gauri''s entry won''t make any difference