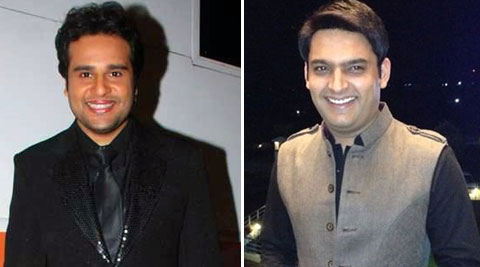 Popular comedian Krushna Abhishek, who is gaining a lot of appreciation for his ongoing show Killer Karaoke on & TV, has showcased his skills not only on TV but also in films. While the actor has gained accolades for his comedy acts and hosting too, he likes being called an entertainer.

He talks about his good rapport with the stand-up comedian and actor Kapil Sharma with whom he has also worked in Sony TV's Comedy Circus with TellyBuzz...

Krushna says that Kapil is a very good friend and he praises him by saying that after his show Comedy Nights with Kapil became popular, people started taking comedy seriously. Well this is not it, Krushna further clears the air about his tiff with Kapil.

Clearing his stance on the tiff with Kapil, Krushna says, "There were rumors that Kapil and I are not good friends as we both are not seen together. Also it is true that Kapil offered me a role to play on his show Comedy Nights... which I turned down. But it was not because of any rivalry or differences, it is just that I need my space and even today if Kapil calls me for his show I would love to do it provided only we both are seen on the stage."

Krushna further adds, "I did 4-5 episodes of Mad In India on Star Plus, where I got my space and scope. As there was only Sunil Grover and me who were doing comedy on stage. So, it is just that now I cannot just go for a walk ins for any show."

"To entertain people is the most difficult job and Kapil is doing it really well. I am happy for him. We are and will always be good friends," ends Krushna.

It would be indeed a pleasure to watch the two great comedians together back on screen!

+ 2
5 years ago Kapil aur Krishna donon ki comparison hi nahin ho sakti. where Krishna is full of arrogance, Kapil is down to earth. We don't want Krishna in CNWK. CNWK team is great.

5 years ago Krishna, such a talented actor, dancer, comedian is wasting his talent in 'Comedy classes' show. He should have gone to films long back. His choice of Kasmira as his girl friend also is a mistake.