After the huge success of Indian Idol 1 & 2, they are back again with the new season Indian Idol 3 based on the theme, hunt for the next “Bhaarat ki Shaan”. Auditions for this season were carried out in 12 cities within and in & for the first time.

Aamaya Date who was involved in promoting the new season spoke to us closely about the upcoming season of Indian Idol.

How did the promotional activities go?

It went well; we were helping out making arrangements for their passes through the auditions, giving the contestants some tips and shared some of our experiences. It was nice, fun and overall we all enjoyed it very much.

Any of your co-contestants joined you in these promotions?

Well, we had a press conference in Mumbai regarding the promotions, where contestants from Indian Idol 1& 2 attended, including me, Meenal Jain, Abhijeet Sawant, Amit Sana and some others.

And where about had you all traveled?

I went to only, it was a good experience. Though other contestants traveled to many other cities as well, including Amit Sana and Meenal Jain were promoting the show in as well.

What are your expectations from Indian Idol 3?

Since it’s a music show, Im hoping to see some very good talent in singing, and it has to be a very healthy competition too.

Your thoughts on judges being changed?

Indian Idol is based on Music, and the participants on the show are its hero and heroines, so I don’t think changing judges makes a difference to a musical show. As long as there are good singers in the competition it’s totally fine.

Any changes in this season compared to previous seasons?
Featured Video 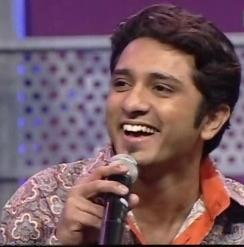 Yes, this time the show is based on singing only, which means judges will not judge based on performance or X factor but its only singing which counts this time.

I will miss them for sure; we have built such a good rapport with them through out the competition last year. I know that many of us will miss both of them for not being on the show anymore.

Do we have any chances of seeing you in any of the episodes of II 3?

Audience will see me in the new season; we will be shooting some promotional episodes, where I will be interacting with the contestants and I shall be performing as well. So watch out for those.

This season audience will see a newly revamped panel of judges, Anu Malik, Alisha Chinai and Udit Narayan along with Javed Akhtar who will be a special judge for this season.

Indian Idol 3 will be telecasted from 4th May onwards, Fri-Sat 9 PM (IST)

15 years ago i am like totally impatient to watch the new season! i didn't watch II2 but this time i am going to watch it =D

15 years ago Cannot wait to see Amey's performance in II3 :D I like how he called the contestants the heros and heroines of the show. Its true.

+ 2
15 years ago First of all, wonderful article and interview Butter.

Secondly, never knew that auditions were held abroad and that this show isn't based on X-Factor. Thank goodness singing took precedence :)