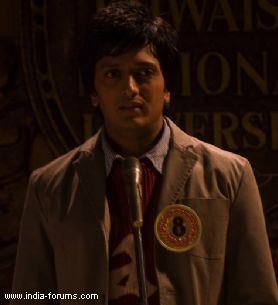 Actor-producer Riteish Deshmukh says that he would love to direct a film in the future.

"Film making is a great process...acting is great and I am enjoying myself in production (too). As a producer you own the entire film, while director is the creator. I feel I should direct a film but not right now I am not ready but in future I will direct a film," Ritesh told reporters in a group interview.

As a producer, he has received his first National Award for his second Marathi production venture "Yellow" at the 61st National Film Awards ceremony, May 3.

The actor, son of late political leader Vilasrao Deshmukh, also feels that as a citizen one must know about their country but not sure whether he will join the politics in near future or not.

"Whether I want to join it or not is a different thing but as a citizen you must know about your country. Being aware is important and having an opinion is very important," said Ritesh who made his Bollywood acting debut with "Tujhe Meri Kasam" in 2003.

The film also helped him find his soul mate in his co-star Genelia Dsouza, with whom he tied the knot in 2012.