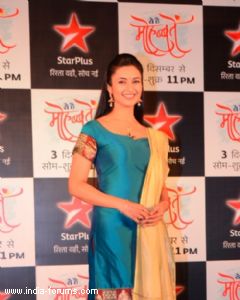 Divyanka Tripathy who rose to fame with Zee TV's Banoo Main Teri Dulhann is back on screen after a hiatus. She is all set to entertain the audience with her new show Ye Hain Mohabattein on Star Plus opposite Karan Patel. In conversation with TellyBuzz the actress talks about her character, bonding with her co-actor, about the sudden replacements and much more...

Here it is what Divyanka shares with us...

Divyanka shares with us that she was waiting to do a daily soap from quite some time. Ye Hain Mohabattein was the right opportunity for her, "I was waiting from a very long time for a nice daily soap to come my way so that I can grab it. I enjoy working in a daily soap that 12 hours shift is something I really enjoy unlike the other actors (smiles). Without work I feel very much restless and bored. I am very happy to be a part of the show Ye Hain Mohabattein, a beautiful and unique story and I am looking forward to the telecast of the show." 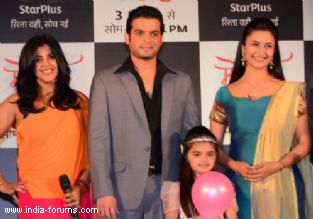 Further she shares about her working with Balaji Telefilms, "As many of them know that working with Balaji is like perfection in everything. Every small thing is taken into consideration and looked at with perfection and kept in mind according to the script which is the best part of working with this production house. It is a very peaceful and happy working environment on the sets of the show."

We quizzed Divyanka with a question asking about Cezzane Khan. As we all know that Cezzane Khan was the male lead earlier who got replaced by the actor Karan Patel. Divyanka had shot a couple of scenes along with him when we asked her on what she has to say on the replacement of Cezzane Khan, she says "Well, that is true that we had made a bank for the show earlier, but I had never worked with Cezzane much as I was shooting for the scenes related to the Iyer family. Later when I came to know about the replacement of the male lead from the show of Cezzane Khan to Karan Patel, it came as a surprise to me too as for the others."

We also asked Diyanka on what she has to say on the sudden replacements that take place even when the shooting for the show has already been done half way, for which she quipped, "No comments on it at all.  I have no views to this question at this moment either."

Further when we quizzed Divyanka on whether will we get to see her in movies too, and she says, "I am actually not looking forward of acting in films at the moment. I have got a daily soap which is very interesting and I am enjoying working for the same. In fact I get to play so many roles and shades in a television daily soap that I have not thought of doing a movie as in yet. But yes, if I get an interesting role, than I might do it but I am not craving for it as such."

Well, it would be really a treat for the fans of Divyanka to watch her on the Big Screen too! We wish Divyanak Tripathy all the very best for her show Ye Hain Mohabattein.

Snigdha_Khanam 6 years ago Wow after a long time will watch Karan in a daily soap.My favourite Robbie

NandzLuv 6 years ago I Love KP aka Robbie!!!

rukhsar.crazy 6 years ago all the best lovely divyanka
hope the show is good